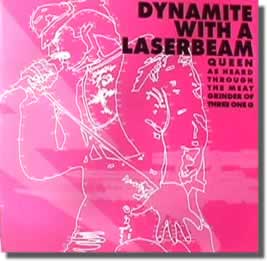 The title of this Queen tribute album is a lyric taken from their song 'Killer Queen.' The line that follows, 'Guaranteed to blow your mind' could well be applied to a number of the cuts on this CD.

I'd like to apologize for the preceding paragraph. Carl, God bless him, never edits anything we write here and will publish whatever we give him; even hackneyed writing like that. So since he won't be the one to tell me to leave it off, I'll have to be the strong one. Let me start over.

I was surprised at how much I liked this CD. Queen was never a band I was all *that* into. I mean, I owned (all right, all right STILL own) Live Killers, Jazz, and News of the World but that was the extent of my Queen collection. Still, while the idea of all these noisy bands doing Queen songs intrigued me, I didn't think I'd really dig too many tracks. In reality, I ended up liking more of them that I disliked.

The Blood Brothers' 'Under Pressure' is a nice mix of the melodic and the screamy.
Get Hustle's 'Another One Bites the Dust' didn't really grab me at first, but on repeated listening it grew on me.
Gogoairheart's 'Death on Two Legs' is reasonably faithful to the original and is, I think, one of my favorite cuts on the CD.
Upsilon Acrux's noisy post-rock instro version of 'Bicycle Race' is pretty great, even without the proto-rap.
Weasel Walter's take on 'Bohemian Rhapsody' is the best and most chaotic version of that song I've heard since We've Got a Fuzzbox and We're Gonna Use It's a cappella interpretation -- especially the climax toward the end of the song.
Spacewurm's 'Vultan's Theme' is a very noisy instrumental but really great -- and I don't even know the original.
Beatbox and distorto vocals are the main features of Fast Forward's 'Crazy Little Thing Called Love.' The Convocation Of's 'Get Down Make Love' didn't do much for me from the start but when the female vocals kicked in on the bridge and stuck around for the remainder of the song, it redeemed that track in my eyes (ears).
Tourettes Lautrec's noisy new wave punk version of 'Killer Queen' renders that song unrecognizable unless you're listening closely to the lyrics.
And lastly, Melt Banana turn in a decent 'We Will Rock You' that doesn't really start to smoke until the noisy turntable work that replaces the guitar solo at the ass-end of that song.

That leaves six other lesser tracks like The Locust's lackluster 'Flash's Theme,' 'The Oath's passable 'We Are the Champions' and a few crappy ones not even worth mentioning.

All in all an enjoyable tribute album; one guaranteed to really piss off any hard core Queen fanatics.