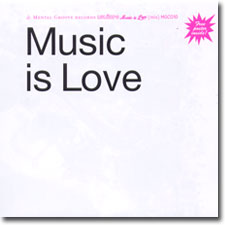 Music Is Love is the latest compilation on Mental Groove Records, the Swiss label that prolifically issues 12 inch singles, and has more recently turned its attention to full length cds and cd compilations.

Music Is Love is a DJ mix disc put together by married couple Lulú and Pollux who form Lulúxpo, based out of Geneva. Lulúxpo are clothing designers, as well as artists/musicians who only have a few releases, but have been around a long time doing DJ nights and radio shows. For some reason, whatever releases they have been working on haven't seen the light of day since 2002, except for this DJ mix cd which came out in 2005.

Music Is Love is a strange DJ mix because like whatever releases Lulúxpo have been working on these past few years since 2002, Music Is Love was actually recorded live way back on September 15th, 2002 (according to the cd sleeve between 4:45 am and 5:51 am). Why it stayed unreleased until now is a mystery, but the end result of this long wait means the mix has a dated circa 2002 sound to it. All of the music included in the mix was current back in 2002, but now it's 4 years old. That doesn't stop the mix from being stellar, but it does stop it from being timely.

The mix has that late night into the morning sun arc to its progression. Early on we are treated to the Tiga-like vocal track Love|Rocket (the original - short edit) by Grom, which was originally a Ladomat 2000 release in 2002, and also showed up on Female Pressure presents Acid Maria & Electric Indigo and Electric Pop 2.

Things head into disco territory for Morgan Geist's Epoch which was an Environ 12 inch release from 2002. Geist offers up the disco groove instrumental sound, leading into the hotter Giorgio Moroder style of Susumu Yokota (best known for his albums on the Leaf label). RE: Disco is a track originally released in the Tangent 2002: Disco Nouveau 12 inch series on Ghostly International and eventually it was rounded up on the Tangent 2002: Disco Nouveau CD compilation.

The Chicken Lips sound was huge in 2002, with their He Not In track issued on a number of labels that year - He Not In was a favorite among DJs.

Another favorite for DJs and compilations was Rippin Kittin by Golden Boy and Miss Kittin - this mixes here perfectly with The Märtini Brös track and even has some Miss Kittin vocals I don't remember from the original (though the cd doesn't say if this is a special mix).

Oddly enough there is one current track included here - it's the hidden bonus track called Amore by Plastique De Rêve (aka Christophe Dasen - he helped remix Luluxpo's 1 + 1 = Love back in 2002) that plays a few minutes after the mix. This track is taken from the recent Mental Groove 12 inch Freaks Of Love b/w Amore. This is the only true hint to what the Mental Groove label is sounding like now - and it's a actually a darker International Deejay Gigolo Records type of sound with dark, pulsing synths and echoed voices.