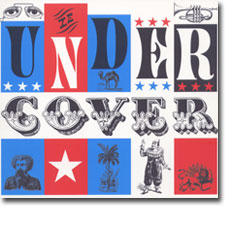 Undercover is a collection of cover versions by Ze artists from the past, with two current artists (Miss OD & Gentlemen League, and Bohemians vs. Cow Boys).

Miss OD & Gentlemen League do a soothing cover of Antonio Carlos Jobim's Dindi, a track originally popularized by Astrud Gilberto. The song is sung in Portuegese, and has a lush production with strings.

James White & The Blacks (with Anya Phillips vocals supplementing James') give us their 1978 cover of Irving Berlin's (Tropical) Heatwave, a track originally popularized by Marilyn Monroe in the film There's No Business Like Show Business. This track has always been a favorite of James White fans, and even though we all know this cover, its presence is welcomed on this disc.

Lio is a French artist who has just had three 80s CDs re-issued on Ze (Premier Album, Suite Sixtine, and Amour Toujours). Here we have her 1980 cover of Gillespie and Coots' You Go to My Head, which Billie Holiday famously performed. Lio sings in a heavily accented voice like Claudine Longet. The song is as lush as the disc's opening Jobim cover.

Lisi, whom (accoring to the liner notes) was a daughter of Cuban exiles living in Miami, takes on Come Rain or Come Shine, a Johnny Mercer / Harold Hanlen song performed by such artists as Judy Garland, Frank Sinatra and Billie Holiday. Lisi had the fortune of having Yello as har backing band on many recordings, including this one. Her track makes me think of Lani Hall (Brasil 66 vocalist) attempting to recond Bjork songs. An odd sound for sure!

Casino Music completely re-invent the1981 Sonny & Cher song The Beat Goes On. The liner notes give us a bit of trivia I did not know - Sonny & Cher's real names: Saltatore Bono and Cherilyn LaPiere. This track is one of my favoritie's on the CD. Casino Music sound like Devo when they covered (I Can't Get No) Satisfaction. The music is great, and there is even a harmonica solo!

Suicide Romeo did a cover of Eno's Needle in a Camel Eye in 1981. The cover has a guitar pop sound not that far removed from classic Kiwi bands The Chills or Verlaines.

Alan Vega, the vocalist of Suicide, is still recording today! His 1980 cover of Gene Vincent's Be Bop a Lua is a perfect match for his vocal style. The music sounds like The Cramps.

My Boy Lollipop is a historic song because of its history. It was the first number 1 record for Island Records. It was recorded by Millie Small while she was in her teens, growing up in Jamaica. Bob Blank's band Aural Exciters recorded a cover of it in 1979. The production is complex, with lots of stuff in it. The girl who sings has a little girl voice that renders the track an acquired taste.

Bohemians vs. Cow Boys 2004 cover of Barret Strong's Motown classic Money is closer to Flying Lizards' style than to a Motown style, though (to use a modern lens) it is closest to what you would expect a Playgroup version to sound like. The beat is much more steady that Flying Lizards used..

Cristina's 1980 version of Michel Polnareff's Poupée Qui Fait Non is pretty nice, with a lot of latin percussion. This song has been covered by so many people that you might not be prepared for how good this one sounds.

Coati Mundi was a member of Kid Creole & the Coconuts. His 1983 cover of Captain Beefheart's Tropical Hot Dog Night is a party track with a latin feel, and one of my favorite tracks on the disc. Rueben Blades is a guest on the track!

Lizzy Mercier Descloux keeps the latin feel, but brings things slow and serious with her 1985 cover of Marvin Gaye's Let's Get It On, which was recorded in Rio de Janiero.

In 1980 Kid Creole & the Coconuts recorded this cover of the Marlene Dietrich song Lili Marlene for their Off The Coast of Me record..

The CD closes with a Burt Bacharach cover: Anyone Who Has a Heart. Sweet Pea Atkinson & Carol Hall recorded it in in 1982 with Was not Was as the producers and backing band.

I like this compilation a lot. I had avoided it for 2 years, as I figured it was just a quick re-packaging of tracks I already had elsewhere. In truth, I had only heard a few of these tracks, and they are all real good.

Ze Records in the gullbuy: