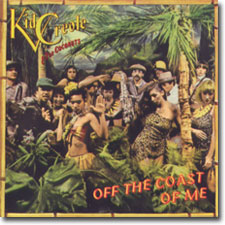 The band took the NYC 'anything goes' ethic of late 70s punk, and started from the same left-field turf as artists like Willy Deville (Mink Deville) or Konk, cmbining in a vaudeville fel as best exemplified by someone like Cab Calloway. Kid Creole & the Coconuts were a large band, including up to four female vocalists and Caoti Mundi on vibes.

Maladie D'Amour is a great place to start. Female lead vocals and a melody that instantly hooks you. This re-issue includes 5 bonus tracks that are worth buying the CD for on their own. One of the bonus tracks is the 'mutant disco' version of Maladie D'Amour.

But the track that will hook you first and best is Darrio. Like the best Kid Creole songs, the lyrics are about him and his life. Darrio is about a girlfriend asking "Darrio, can you get me into Studio 54." Poor Darrio responds
"They tell me the place is just about through. It ain't even safe to get high. They don't even play the B-52s. My kind of heaven, is Club 57."
"So many ways we could spend the night. We could go check out Mr. James White."
One of the bonus tracks is a 12inch disco mix of Darrio.

Lili Marlene is a Marlene Deitrick cover sung in German by one of the girls in the band. This version of it appear's on the Ze Records compilation Undercover. The track starts off with a male wordless vocal like the beginning of Frankie Valli and the Four Seasons' Rag Doll.

Bogota Affair is one of my favorite songs that Kid Creole does lead vocals on. It has a latin beat and steel drums, and (as usual) tells an interesting story. The song has an English portion and a Spanish portion will slightly different music. The track adds up perfectly.

The first of the bonus tracks is a cover of the 1979 disco classic There But For The Grace of God, originally recorded by Machine. The Machine version was a huge underground club hit that was very controversial, as the song tells a story of an inner-city couple having a baby and moves out of the Bronx to someplace overseas "where there's no blacks and jews." The song follows the girl's young adult life as she ends up in all the trouble the parents hoped to remove her from when they moved away from the Bronx. Even though the song was originally sung by a black woman, it eventually was recorded without the offensive lines. The Kid Creole version gives the song a latin barrio sound, a lot of backing vocals and percussion, and does not include the questionable lyrics.

He's Not Such A Bad Guy After All was the B-side of a 12inch. It is a real find, as not many people have heard it, and it is a great vocal track - one of my favorites on the disc. The song starts off like a Shangri-Las track with the gal talking about her guy, than becomes more similar to Patti Palladin/Judy Nylon (Snatch).

The 12inch mix of Yolanda takes a song that never struck me on the original LP and turns it into another great number with male and female vocals, lots of rhythmic handclaps, and an African/Island tropical feel.

Do I recommend this CD? You bet. It is pretty fantastic.

Kid Creole & the Coconuts in the gullbuy: