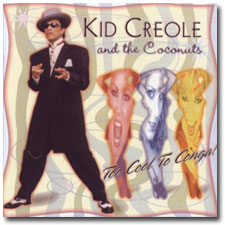 Kid Creole is August Darnell. He has been making music as Kid Creole and the Coconuts for over 20 years.

'Too Cool To Conga!' was originally released in 2001 as a comeback album. Rainman Records has re-issued the record with three bonus tracks.

Nowhere on the record does it give a year. I only found out it was originally released in 2001 today, as I set out on Google determined to get an answer to the record's origins.

The record sounds real fine after you see The Triplets of Belleville. The whole disc is filled with swing styled music. The record was dedicated to Cab Calloway by Kid Creole.

The three bonus tracks are Savannah, 1+1=1, and the Louis Jordan cover Choo Choo Cha Boogie. The record has another cover, Flip, Flop and Fly, made famous by Big Joe Turner.

It took me a long time to get into this record. There were no tracks like Darrio or Bogota Affair from his Off The Coast Of Me record. Instead there were odd tracks like Savanna, which reminded me of Mink Deville, with backing vocals by Toy Dolls.

But eventually I came to really love tracks like Stingy Brim and the remake of a 1985 song, Endicott. This record is easy to trash if you just listen to it by sampling sections of tracks, but it has heart and value. I really like the way Kid Creole writes lyrics - they are about real people in real situations we can all relate to.

I love the song Who's Your Daddy Now?, about winning the lottery. The way he sings about it is just the way I would feel. Likewise, Savannah is a song celebrating the joy that his (unplanned) child brought into his life. The songs make me smile and capture what it is like to live in the city without much cash, making the most of life and having fun in spite of everything else.

There are even two songs from the perspective of the Coconuts - Eva Tudor-Jones, Nikki Belsher and Diana Diane. Get Rid details discovery of betrayal - about finding room receipts, about having given him a chance before, and how he is reprehensible. In 1+1=1 we hear a decription of what the perfect mate would be like. The lyrics are so real, not glossy or studied.

There are stories between the boys as well. The title song Too Cool To Conga has Kid Creole telling his bandmates what happened at a party after a Kid Creole and the Coconuts gig, ending with partiers getting thrown in jail. It isn't glamourous. Kid Creole is pissed off at the guy who took the party out of control.

It's too bad that the band missed the swing revival when this record originally came out. I hope the disc can find an audience among people who enjoyed the swing that made up the soundtrack of the independent animated film The Triplets of Belleville.

Kid Creole and the Coconuts in the gullbuy: