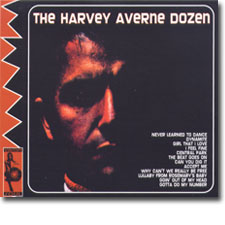 Harvey Averne was a latin soul-funk writer/producer with a voice like Sammy Davis Jr. and a band that knew how to swing the beat.

This 1971 CD is equally split between instrumentals and vocal tracks. There are no bad tracks on the record. It was the second record by The Harvery Averne Dozen.

His choice of covers is interesting, and the fact that he does all the covers as instrumentals even more so. Beatle's I Feel Fine picks up a latin beat and percussion, Sonny & Cher's The Beat Goes On has great brass and a stretched out tempo. Polish composer Krzysztof Komeda scored a classic soundtrack for Rosemary's Baby, and Lullaby From Rosemary's Baby is the most peaceful song on this record, and a very interesting choice to cover. Teddy Randazzo and Bobby Weinstein's Goin' Out Of My Head is a classic that has been covered by everyone from Frank Sinatra to Sergio Mendes & Brasil 66, but once again, Harvey's version is a unique take on the track.

The arrangements were put together by Marty Sheller, the same guy that Mongo Santamaria used.