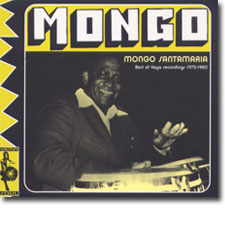 Cuban born Mongo Santamaria is best known for his work in the 50s and 60s as one of the best percussionist ever with Pérez Prado, Tito Puente, and Cal Tjader and for such songs as Afro-Blue and Watermelon Man. That period has been compiled many times over, so the Vampi Soul have seen fit to release a compilation featuring his years spent at the Vaya label between 1973 to 1980.

Vampi Soul has done a fine job spotlighting this lesser known period in Mongo Santamaria's career. The only album they skip is the Drums and Chants album which was a collection of traditional chants with drums as an instruction record. Whether you like Mongo's original sound or the 70s disco/funk sound, this compilation will not let you down.

The compilation starts out with 4 tracks from the Fuego album - Fingers, Crazy Lady, Malcolm X, and Teminha Pra Bebe. After the brief introduction, Fingers kicks in with some sweet percussion and distorted guitars making it sound like a blaxploitation soundtrack. It grooves for a sweet 5 minutes and you won't want it to end. Crazy Lady is a bass heavy organ groover with pounding rhythm and blazing horns. Malcolm X has a back to the jungle vibe with some uptown horns, while Teminha Pra Bebe has a lighter Brazilian jazz groove with some sweet trumpet.

Next up are a slew of live tracks from the Live at Yankee Stadium album, including Dr. Gasca, Cousin Jody, Coyulde and Black Dice. Mongo really lets the percussion rip on these blazing live tracks. Coyulde has some call and response vocals (most of this disc is instrumental) with a Caribbean vibe, but for the most part these tracks are funky workouts.

There are a couple of tracks from the Dawn - Amanacer album, including the weirdest named tracks here called Happy As A Fat Rat In A Cheese Factory and Jelly Belly. He also covers the percussion classic Manteca. Mongo starts getting electronic sounding on the weird named tracks, bringing in the funky disco vibe. Manteca ends the compilation and is a monster percussion workout with a jazzier flare than the other two more 70s sounding tracks.

Mongo Santamaria continues the disco vibe with four tracks taken from the Afro-Indio album, including Funk Up, Mambomongo, Funk Down, and Lady Marmalade. Funk Up and Funk Down are of course...funky, while Mambomongo brings in the Cuban sound with electric keyboards, thick bass, charted hornlines and the percolating percussion, letting him and his group stretch out. The cover of Lady Marmalade is funky and strange with only a hint of the vocals left, but the horn melody is fitting to the Mongo sound.

There are two tracks from the A La Carte album - Hey, You Sexy Thing and Umbalayeo. Hey, You Sexy Thing has an elastic sounding bassline, while Umbalayeo is a brief but cool percussive workout with some more of the Afro call and response vocals. It's just too bad it fades after a mere 2 and a half minutes instead of grooving for longer.