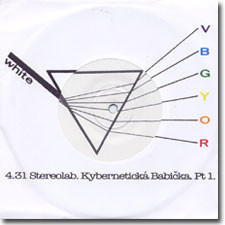 For their first release after losing their contract with Elektra, Stereolab have once again rejoined the Too Pure label and released 3 limited edition 7 inch singles. These singles include Interlock b/w Visionary Road Maps, Plastic Mile b/w I Was A Sunny Rainphase, and Kyberneticka Babicka Parts 1 and 2. And they are a fine example of the group returning to its roots, combining the group's repetitive moog riffs, driving melodies and haunting vocallines that float by in the mist of building tension.

The best of the singles is Interlock b/w Visionary Road Maps. Interlock has a driving melody, a chorus with sifting moog melodies, and added horn solos. Visionary Road Maps keeps the pace going, with more emphasis on the guitars and funky keyboards. This sounds like the Stereolab of ten years ago or early Broadcast and is quite refreshing.

Plastic Mile has a more difficult melody while it stretches out with a loping irregular beat and organ blending notes before opening up into a sunnier chorus. I Was A Sunny Rainphase has a more driving melody with squelching keyboard accents with a High Llamas funky type of break in the middle to slow things up for a minute.

The final single, is the two part Kyberneticka Babicka. This is the Stereolab version of minimalism like Philip Glass, with repetitive, wordless vocal and repeating organ riffs played over a repeated drumline. The least conducive to the 7 inch format, it's a little odd to have the song split up into two parts, with some of the best parts coming in the second part. It's the most enlightening, but also the one I listened to the least when I put each single on.