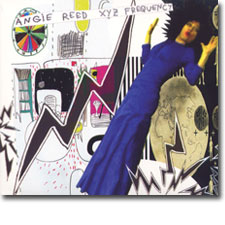 XYZ Frequency is the second full length from Angie Reed, and it is a very good record - better than the debut Angie Reed presents the best of Barbara Brockhaus.

Angie Reed first came onto my radar when she joined Françoise and Brezel as a replacement member of Stereo Total in a 2001 US tour.

Her debut on Chicks On Speed Records was hated by lots of people who thought she sounded like a drunken no-talent. I think the record was good, and that Angie assumes characters for her songs.

This record has three great songs one right after the other. Dancing Tarantella to a Machine Gun is the standout track on the record. Dings Dums Bumst Dings Da rocks realy hard. Longest Days in Summertime feaures Angies out of tune vocals singing a melody not far removed from the theme song to the American 60s TV show I Dream of Jeannie, and a keyboard part that could remind you of Emerson Lake & Palmer's Lucky Man.

Some of the songs are experimental in an electronic/rock/noise manner similar to the French artist Sir Alice (listen to Disco Telefonino).

There are two electronic noodling instrumentals. Cherry Blossom apes the sound of Perrey - Kingsley if they had been performed by B-52s. Ba Boon of the Loom reminds me of Shock the Monkey by Peter Gabriel musically, though it is far more playful and amatuerish than he would ever dare be.

UFO A Go-Go has male gues vocals by Namosh as a warped story unfolds about (naturally) UFOs and such. A lot of the songs tell stories that are interesting to listen to. Bend the Truth in the Confession Booth is written through the first person telling the story of a nun.

Yes, I Know! is my second favorite track after Dancing Tarantella to a Machine Gun. Mario Mentrup provides answering vocals to Angie in a killer track with sharp electronic percussion that could qualify the track as Electronic Body Music.

The album closes with an Eric D. Clark mix of the first song on the record, Hustle A Hustler. This version has tambourines and an I Feel The Earth Move ( Carole King ) styled piano and is more grand than the original.

5:15 into the last song (the Eric D. Clark mix of Hustle A Hustler) is a hidden bonus track. It is an electronic instrumental that lasts for three minutes.

I would recommend this album to any friend that liked offbeat dissonant rock with electronics. There are no bad songs, and lots of the record is interesting.

Angie Reed in the gullbuy: