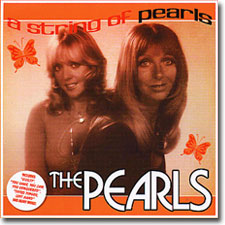 The Pearls were a girl singing duo from the UK in the 70s who combined together the retro girl group sound with a soulful glam style featuring Lyn Cornell and Ann Simmons from The Vernon Girls with help from Phil Swern. They released a slew of 45 singles which Rev-Ola have lovingly compiled on one disc along with some out takes. Anyone interested in the glam sound, or retro girl group sounds from the 70s like The Carpenters, the Rock Flowers or American Spring (with Brian Wilson's wife) should check this out. There is some distortion on some tracks due to the loss of the master tapes, but that doesn't detract from the listening experience too much.

The Pearls were originally created to capitalize on the fact that some obscure 60s soul and pop records were becoming hits on the dancefloors in the UK, so The Pearls released covers of Third Finger, Left Hand (a great b-side from the Martha Reeves and the Vandellas hit Jimmy Mack) and The Ronettes You Came, You Saw, You Conquered. These are some great soul and pop 60s covers.

These covers remind me of the early 70s group the Seashells, which included Vicki Brown (another Vernon Girl who later recorded with Love De-Luxe and Cerrone) and Mary Partington (her sister), who released a cover of Lesley Gore's Maybe I Know and The Best Part Of Breaking Up in 1970.

The Pearls also did some originals written for them including Lead Us Not into Temptation (which starts out the disc with a blast of James Last styled pop - which is fitting since Lyn Cornell also sang with James Last), Yo Yo (a fuzzed out handclapper), and Wizard of Love (a song that had hit written all over it that failed to chart for the girls) which all have a more 70s sound to them, but are also superfine concoctions. Wizard of Love is pretty funny too because it sounds like they are singing "Wizzer of Love".

Also great is their unreleased cover of the Everly Brothers hit Bye Bye Love which is included from an unreleased acetate and has an updated (for the 70s, that is) fuzz guitar sound with some sweet handclaps and female harmonies.