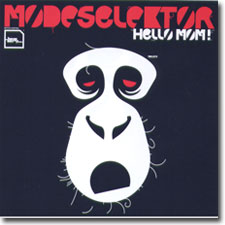 Modeselektor are a duo from Berlin, Sebastian Szary and Gernot Bronsert. They have released a handful of 12 inch singles on the Bpitch Control label, like the In Loving Memory 12 inch, along with appearances on compilations, like their track Don't Panic on the Camping compilation, the Rave Anthem on Ellen Allien's My Parade mix cd, and Wir Schleifen Gleise Leise on the Kollektiv 3 12 inch compilation.

Hello Mom! is their debut album for the Bpitch Control label and it features 3 collaborations with TTC, Sasha Perera (from Jahcoozi), and Paul St. Hilaire (formerly known as Tikiman), along with a slew of Modeselektor tracks on their own. It's hard to believe this is their first album, since they've been around so long.

It makes sense that Modeselektor start out the album with a collaboration with TTC from France since Modeselektor are probably better known there, with their constantly playing in Paris. French rap is funny, but Modeselektor know how to slice and dice it nice on the opening Dancingbox.

That rapping slice and dice energy continues on The Rapanthem (a followup of sorts to The Rave Anthem from Modeselektor's Turn Deaf EP), which combines vocal snippets with anthemic floating organ synth hovering over the top.

Kill Bill Vol. 4 emerges from an ease dropping on a guy who sounds retarded, before it kicks into high gear with slabs of bass synth and a rock solid beat.

Ziq Zaq is named after a Persian restaurant Modeselektor like to eat at, and it combines a breakbeat with more organic synths and distorto melodies.

The UPS Edit of Earth starts out as mutated sound, before clicking into sync in an off kilter way like broken synths battling against the storm surf.

Fake Emotion sets the duo up with a dubby downbeat workout and vocals by Paul St. Hilaire. The other collaboration is Silikon and has Sasha Perera's vocals snipped and chattering over a broken booty beat.

In Loving Memory builds up with clicky beats and organ samples a la prog rock. It's building rhythms and bell-like sample are a call to memory.

Hasir contains a sample of Turkish guitar notching out a sweet melody while swatches of beats and bass warble underneath it like whales and divers slapping waves.

The album closing I Love You is a sweetly melodic closer with reverberating synths bouncing between the closely honed rhythms.