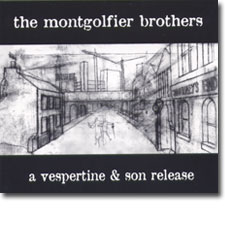 This latest release from Manchester, England-based group, the Montgolfier Brothers, heralds a true return to form. The Montgolfier Brothers is the brainchild of Mark Tranmer, who also records as GNAC, and RPM Quigley, otherwise known as 'At Swim Two Birds' or simply 'Quigley'. This is their first release new material since "the World is Flat", that was released on Alan McGee's London-based Poptones label and the first release by them on the recent "Vespertine and Son" label.

Musically, they have always been inspired by the quieter aspects of work by French film soundtrack composers such as Francois de Roubaix, Michel Legrand and Philippe Sarde. Being from the Manchester area, the work is also heavily influenced by the heyday of such independent labels as Factory Records (longtime home of the another influence, the Durutti Column) and Les Disques du Crepuscule, their sound being more akin to the latter than the former in many respects.

The Journey's End EP opens with dense organ lines then minimal acoustic piano taking over the central theme, representing the steady march of time, a reflection on the loss of a dear friend. RPM Quigley's trembling, Manchester-inflected accent bringsing a distinct Northern quality to the emotional content of the song. Journey's End is filled with vivid impressions of memory and existence, it focusses less on evoking the past, but rather the feeling of absence itself. It is a song that evokes the perfect tone for reminisence, never approaching the maudlin or bathetic.

The second track, Bridestones Revisited, which comes across as rather similar to GNAC as if rewritten for a chamber ensemble, the sound is developed and expanded upon. It begins in a nearly baroque manner with organ and the occasional flute, with a clear emphasis on woodwinds primarily, the opening into echoes of guitar and piano.

The third track, Koffee Pot Blues, retains the quiet mood of Journey's End, as it builds on a theme introduced by organ and flute, with a hint of Tuba and French Horn in the distance-- as if in remembrance or regret. A cello begins to play, driving the piece forward, with an acoustic piano finally picking up the main theme. However, it isn't until an electric guitar comes into focus that I recognize this theme as originating in Journey's End, the opening track. It is a march of sorts, an invitation to a journey. RPM Quigley sings "Sit and tell your problems to the Window, drown them in the sweet and stagnant tea.." It is an invocation for contemplation of time past. Again, he tells us "Always time for open-ended journeys, cast unintended looks at passers by..." He refers to the memories constructed by faded urban spaces. The distant history imbued in city life. This is a more poetic piece than Journey's End, as it it told through the production of concrete images, calling upon the senses to release memory.

For sheer consistency in mood and design, look no further than the Montgolfier Brothers to conjure heartfelt moments for rainy days. This is a perfectly composed EP. I cannot wait to hear the album.

Montgolfier Brothers in the gullbuy: