The El Vez record is my fave of this weeks adds. The Zeros were Californian punk pioneers w/an explosive coctail of 60s punk, Stooges, & New York Dolls. Now mainman Robert is best known as El Vez! I had seen his stuff around for a long time on many different labels, but I had never ever heard any of it till popping this disc in the CD player. all i knew was that he calls himself 'The Mexican Elvis". This CD is the second release on Alan McGee's new label Poptones. The Montgolfier Brothers CD reviewed later in this issue is the first Poptones release. Alan McGee founded and ran Creation Records. The images on this CD are done by 'Design El Graphic' and have that distinct El Records look. El Vez's music is well produced and very listenable. It is not the joke that Dread Zeppelin were years ago in their piss-take on Elvis. In fact Elvis Presley material is not the only drawing point that El Vez launches from. "El Groover" is based on a T Rex song. Many of the songs incorporate multiple pop references into them. I've heard bits of the song "Tequila", Traffic's "Please Mr. Fantasy" (on "En el Barrio"), the Godfather Theme, Rod Stewarts "Maggie May", and maybe even a bit of Bruce Springsteen (in "It's Now or Never"), Rolling Stones "Sympathy For The Devil" (in "Immigration Time"), "There's a Riot Goin' on" (in "Trouble"). There are two Bowie covers that are similiarly treated. Rock n' Roll suicide" incorporates bits of The Beatles "Oh Darling", "Lady Stardust" is treated straight. Paul Simon's "Graceland" is covered as "Aztlan". But in the end my fave might be one of the El Vex originals "Soy Un Pocho". On a musical/historic note, Chip Kinman of 'The Dils' and 'Rank and File' plays guitar on some tracks, and Kristian Hoffman of NYC band 'The Mumps' plays keyboards. This disc is really good. El Vez is no joke. 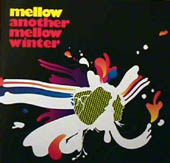 The full length from Parisian band Mellow has 10 new songs on it and 4 songs that we have on the EPs. The record starts off right strong with "Lovely Light", which has the bassline from The Jam "Start" (you can view it like that or look back an additional layer and say it is the bassline of The Beatles "TaxMan") played on synth with a vocal that somehow reminds me of Animals period Pink Floyd. I hated Pink Floyd during that period, but Mellow find a way to distill the technology of now in the stylings of yesterday into a crystalline pop entuity. Next is the instrumental "Mellow" which is on this disc in three pretty different versions (as songs 2, 7, and 12). "Instant Love" is next. It is the song we loved from their first EP. It perfectly shows their style, sounding like The Beatles, XTC, & Tahiti 80. "Shinda Shima" reminds me of the Grand Funk song "Heartbreaker" (from their 'On Time' LP) done by Air (those vocodered vocals) with "Strawbery Fields" styled keyboard. Truly. Next is the A-side of the second single, "Another Mellow Winter". "Bells" follows as a short one minute interlude. After the second version of "Mellow" comes "Lost Night". "Lost Night" breaks their style mode a bit with spoken vocals that tell somewhat of a story on top of a chilled out bass heavy slide. "Violet" is an upbeat song that brings up Tahiti 80 associations again. "Interlude" from the second EP comes next, a Beta Band styled song with beats and just a bit of vocals. It's actually a very strong song, maybe my second fave on the disc. "Sun Dance" reminds me of Supertramp with it's keyboard sound. The third version of "Mellow" is next, then "Overture" from the second EP. The final song is one of my faves on the disc. It is called "Paris Sous La Neige". The song ties together many strengths from the Mellow songbook into one song, with confident lyrics (derived from The Beatles "Baby You Can Drive My Car") and a very positive tone.

Named after the French brothers who invented hot-air balooning in 1783, The Montgolfier Brothers are an English duo that play mellow songs kind of like The Durutti Column or Michel Legrand. 'Seventeen Stars' is an English re-release of the full length that came out on the Paris label Vespertine Records (which recently closed down). The Montgolfier Brothers are Mark Tranmer (GNAC) and Roger Quigley (Quigley). Each have extensive discographys in their solo projects as well as the recorded output of The Montgolfier Brothers. The title song ("Seventeen Stars") is my very favorite song on this disc, though I also enjoy the instrumental opener "Time spent Passing", "In Walks A Ghost", "Pro-Celebrity Standing Around", "Une Chanson Du Crepuscule", and the instrumental closer "Fin" 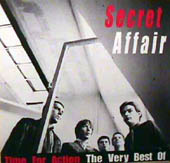 For a spell in 1979 Secret Affair were THE band if you were into The Jam and the Mod scene which was bursting out all over London. Secret Affair's vocalist Ian Page was pegged "The Face" by everyone for his mega-cool look, lyrics, and style. He then started i-spy records, which put out singles by Squire as well as Secret Affair. The coolest bands of the 1979 Mod scene were (an entirely personal perspective) Secret Affair, The Chords, Purple Hearts, The Lambretta's, The Times, & (of course) The Jam. I always thought that The Merton Parkas were way below any of the bands I listed, even though Merton Parkas got lots of press and attention. Their were many second tier bands who put out a single or two but did not leave behind any real legacy. The Times really were a bit like that. They have the absolutely incredible "I helped Patrick McGoohan Escape" song, buy little else that really stuck in your head. The Lambretta's had out a great LP "Beat Boys In The Jet Age" that you can still find cheap in many used record stores. It was the only one of the Mod records I loved that was actually released in the US. The Chords and Purple Hearts remain my two fave bands that put out full lengths, and Squire is my fave for their singles. Squire did put out full lengths, but only very poorly distributed, or released after they broke up, under the vocalist Anthony Meynell's name. Purple Heart's 'Beat That' LP came out on Fiction Records, the same label as The Cure. At WZBC we have a CD reissue of The Chords 'So Far Away' LP (see Aug. 22 gullbuy ) which has bonus songs from their 7"s. Secret Affair are not a macho band. If you have little tolerance for 'wimpy' bands like The Cherry Orchard you may find Secret Affair to be weak. But if you like Northern Soul influenced guitar pop with Rickenbacker guitars ringing you may just love this Secret Affair record. 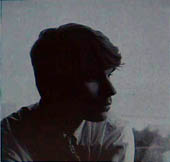 The second CD by the guitarist/vocalist of The Umpteens, who put out the great 'Turn your living room into a dancefloor' 7" in 1995. This CD has a new version of "Hang Out With My Friends" from that EP. The first CD ('Maniac') came out in 1997. Don Lennon is technically a local band to the Boston area, though Don Lennon's sucess has always been centered more in the midwest, where his tours have always been very successful. Don Lennon is a band kind of similiar to Toulouse, another Boston-area band who seldom play here, enjoy success elsewhere, and share the basic sensibilities of Don Lennon. Both have a Mod feel and seem to model their sound on Scottish & English bands of the 80's. Don Lennon's sound is closest to Munich's The Bartlebees , a band who have been putting out stuff from 1992 to the present. Don Lennon also have a touch of the Postcard Records band Orange Juice in their sound. Just recently I had a conversation with a friend about Brian Wilsons lyrics, and how he just writes about whatever he happens to be doing. No matter how common the subject matter (watching Johnny Carson, thinking about Stevie Nicks, giving someone directions) he could spin it into an intriguing lyric. While Don Lennon might not be a Brian Wilson he does have a similiar skill for transforming the everyday into his lyrical content. Don Lennon lets you into his value system and interests in his lyrics, without subjecting us to heartfelt confessionals that most 'get to know me' lyricists resort to. My favorite songs are the remake of "Hang Out With My Friends", "Get to Know My Neighbors", & "The Need To Sing". One song ("Bass Guitar") musically reminds me a bit of the Lets Active song "Every Word Means No". 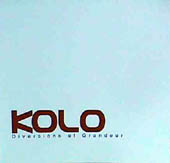 The first song starts with a synth sound like at the end of the Iggy Pop song "Mass Production" (from 'The Idiot' LP) then moves quickly into the same territory as Metamatics or stuff on the Leaf label. Pretty neat for a Boston band. In fact, the label this is on (C-FOM Records) has a strong interest in Boston's Electronic Music scene. C-FOM's last release before this disc was the 'Boston Not London: Volume One' compilation, which has two songs by S. Pescatore (Kolo) under ther name Plex. Like Don Lennon, C-FOM is based in Somerville MA. My favorite songs are "Divergence", "Subversive Behavior", "Circumstance", and "Helium?". Each of them have quirks and tweaks that bring them alive, and raise them above the heavily saturated Electronic Music scene which seems to be peaking everywhere today.