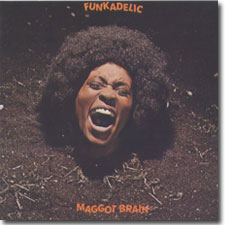 The final album recorded with the original lineup, Funkadelic's Maggot Brain was the classic masterpiece that their first two albums tried to be but didn't quite make. Everything jelled perfectly on Maggot Brain, their 3rd album released in 1971 which has been remastered and reissued on the UK label Ace Records in 2005 with cleaned up sound and bonus tracks. Sadly, this would be the last album recorded by the original lineup, thanks to money and drug problems which plagued the band from the beginning. From the startling artwork which features an afro'd black woman buried in dirt up to her neck, and a skull in the dirt on the other side of the album cover, to the mind melting funk in the grooves, Funkadelic's Maggot Brain is an incredibly long lasting work.

The album starts with one of the greatest Funkadelic tracks ever and the album's title track, Maggot Brain. It starts out with another classic George Clinton spoken introduction, which is as warped as they get:

Mother Earth is pregnant for the third time, For y'all have knocked her up. I have tasted the maggots in the mind of the universe. I was not offended, for I knew I had to rise above it all....Or drown in my own shit.

Maggot Brain is almost a reverse dub because the whole band was recorded, and then George Clinton decided to take out the rhythm section and only includes a rhythm guitar and Eddie Hazel's astounding 10 minute guitar solo.

A second 1997 version of Maggot Brain is included as a bonus track - without the introduction but with all the instruments that were recorded at the original sessions, and it makes for an interesting listen in comparison to the well known album version. You can see why Clinton decided to remove the other instruments because they just weren't as good as Eddie Hazel, making the song seem more like a blues track than the sonic psychedelic masterpiece it ended up being in the album version. I always did think it sounded kind of strange without a rhythm section though, so it's cool to finally hear it all.

Super Stupid is another album track which also shows Eddie Hazel's amazing chops, but this time in a metal funk hybrid which was insanely influential on loads of metal funk artists who never quite worked it this well.

Can You Get To That and Back In Our Minds were released as the first single from the album (and both appear on the album). Can You Get To That sounds like a hybrid of Spooky Tooth and Sly Stone for a laidback groove, while Back In Our Minds has a playful vibe thanks to the Environmedian (environmental comedian) J.W. Jackson on jew's harp, who often worked as their opening act doing a stand-up routine.

Hit It And Quit It was also released on Westbound's subsidiary Eastbound in a version recorded by Bobby Franklin's Insanity which can be heard on the Westbound Funk and Gettin' It Off compilations (both compilations of Westbound artists). It was the second Funkadelic single released from the album along with Whole Lot Of BS as the b-side. Hit It And Quit It is a fine track with some sweet organ meeting a guitar wah wah workout. Whole Lot Of BS is included as a bonus track and is a piano poundingly sweet quickie that lays down a frantic groove about all the BS in the world.

You And Your Folks Me And My Folks was recently covered on the Spaceways Incorporated vs. Zu album Radiale released on the Atavistic label from 2004. The original Funkadelic version has an astounding robotic groove and is one of the greatest album tracks here (it's a shame it wasn't extended beyond the 3 and a half minute mark with the rhythm coming to the forefront for awhile).

The album closing Wars Of Armageddon was recently used on the 2-cd set How To Kill The DJ [part two] by Optimo (Jonnie Wilkes and Keith McIvor, aka JG Wilkes and JD Twitch) on Kill the DJ Records actually as that mixes starting point. It ends the Maggot Brain album with a total freakout jam that lasts for 10 minutes of chaos and wonder.

The only odd track that doesn't totally fit the rest, is the bonus track I Miss My Baby by U.S. Music With Funkadelic. U.S. Music was a group led by guitarist Gary Shider who eventually joined the P-Funk later. I Miss My Baby is a slow burning soul track with falsetto vocals in a Curtis Mayfield and the Impressions style. It was a highlight from the Music for My Mother compilation and is a nice addition to this reissue.