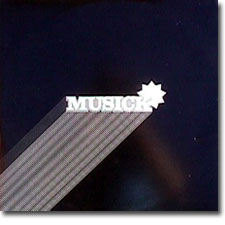 After four 12 inch compilations of various artists, Musick (the sublabel of Shitkatapult which centers its attention on the dancefloor in its series Musick To Play In The Club) finally centers it attention on the new and upcoming talent Holz.

Holz is the techno project of René Finken, a relatively new artist who at the moment is also studying German, English and Philosophy at the University of Aachen. He also has an ambient music project called Renniac with releases on the web label Stadtgruen and a collaborative project with Lukas4004 called Tha DiskonerdZ. The Holz debut 12 inch single Mein Block is a super strong effort filled with four impressive and varied tracks.

Right out of the gate, Mein Block starts out strong with the distorto stop and start stomp of Axt. Utilizing various computerized glitch sounds in the actual rhythm, but retaining a melodic bass head, Axt moves and grooves as it builds to its conclusion.

The title track, Mein Block, is up next and it brings in some acid techno sounds into the mix for a fine closer to this side of the EP.

Bollerwagon starts the second side with an elastic, electro house track with some slapping rhythms and a bent bassline that keeps modifying itself. And the EP ends with the more mellow Glut which does a fine job of changing up the tempo and feel for a sweet ending track. 1