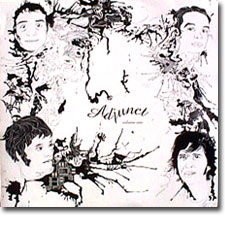 Adjunct Volume One is the first release in a series of releases on the new Adjunct label run by Kenneth James Gibson (of [a]pendics.shuffle) and Konstantin Gabbro (from Orac Records) and distributed by Kompakt.

Collected here are four tracks from Pheek (aka Jean-Patrice Remillard) from Montreal, California-based John Tejada, Bruno Pronsato (aka Steven Ford), and [a]pendics.shuffle (aka Kenneth James Gibson - half of Adjunct).

Kiko Tabuchi offers up some cool artwork for this 12 inch, but the end result seems little more than a showcase for [a]pendics.shuffle who have the only great track here, along with a pretty nice John Tejada track. Let's hope things improve on Volume Two.

This EP compilation starts out with a simple and meandering minimal glitch track by Pheek called Boot Me. It trucks along every once in awhile offering up a paused rhythm break or a slapping rhythm turn, while rhythm pops build up with a peaking background throb of keyboard dub. It just sort of keeps going though and didn't do much for me.

John Tejada's Are They Mad Future Robots? is next up. Slightly more interesting than the previous track, there's more ebb and flow to this techy acid track that builds to a web of static washes. I'm a bit of a sucker for that acid sound so this is a winner, though it's not astounding.

Bruno Pronsato's Party Soap continues as the first track on the second side with the most annoying glitchfest on offer here. Even when it builds into something, that something never really jells. I wasn't a fan of the headache inducing sound brought forth by Bruno Pronsato.

This 4 song EP ends with the best track, the least throwaway track and the reason to invest any time in Adjunct. [a]pendics.shuffle has the most annoying name of any artist here, but the freshest sound. Even the title is annoying in an Aphex Twin annoying kind of way. After a cool (as in not much happening) introduction, Styro Vygor's rhythm really kicks in dub style and with a minimal gone wild approach that makes this soundtrack for futuristic pirates a must hear. The only thing holding back this hot track are the various bass lines which come and go giving the track an everything and the kitchen sink feel.