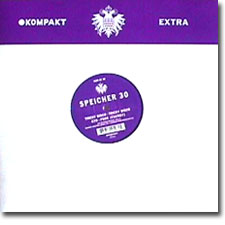 The 30th release in Kompakt's Speicher series gives us two tracks that have not been available for some time. The tracks appear in their original form - there is no remix treatment.

Both GTO and Tricky Disco were projects of Lee Newman & Michael Wells. The duo released lots of stuff under all sorts of names. Besides the names used on these recordings, they released singles as John & Julie, Church of Exstasy and Technohead. In 1995 Lee Newman passed away due to cancer.

Tricky Disco's Tricky Disco was originally released in 1990 on Warp Records. The track has sped up vocals, which combine with the upbeat feel and 4/4 beat give it a J-pop feel well before that genre took hold in the late 90s. The sped up voice saying "this is tricky disco" gives the track a bit of a novelty feel, though I'll bet this would be killer in an Acid House set. Extra points for a background chorus that sounds like the crowds on a mountainside in India chanting the famous 5 note theme given to them by the UFOs in the beginning of the Speliberg film Close Encounters of the Third Kind.

Greater Than One (GTO) released Pure (Energy) in 1990 on the Belgian label GoBang. The fast paced electronic beat makes it an Electronic Body Music track. It uses three vocal tracks. One coos like a birdcall, one is a wordless vocal that slides beneath everything like a plush carpet, and one is a wordless vocal with a slightly Bollywood warbling sound. The three work together to make the track interesting from start to finish.

One of the most worthy releases on Kompakt - pick this one up if anything in this review sounded interesting to you.