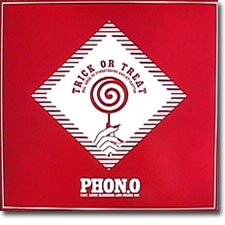 Phon.o is Carsten Aermes. The original versions of both tracks are taken from the Burn Down the Town full length.

Trick or Treat has vocals by Kristen Erickson (aka Kevin Blechdom). The music is a bit like Soft Pink Truth - electronic dance music pureed with ghetto-tech and glitch.

Funkstörung's mix of the track is not that different than the original version. Kevin Blechdom's vocals get a little chopped up, but the feel is basically the same.

Busted in DA D is a ghetto-tech track with DJ Assault styled vocals by MC Stadik 006 of Numbskullz/Guinea Pig Products. The second half of the song takes on an EBM (Electronic Body Music) feel that honors the Belgian sound of the early 80s.

Kit Clayton's mix of the track cuts the music into stacatto bursts that are held together by the main synth. In the second half of the track he works the drums so they have a jungle rhythm like in the classic Disney Jungle Book song I Wanna Be Like You, which was recorded by Kenny Ball.

The music on the Tick of Treat 12inch is more aggressive than any ever recorded by Carsten Aermes(that I know about). As the Burn Down the Town record is released here in the US on Kid 606's Tigerbeat6 label, he must have made a conscious move away from the glitchy electronica sound that characterized his earlier work. As evidenced here - the new sound works!

Immer - a mix by Michael Mayer