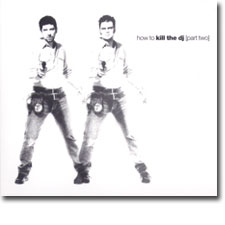 How To Kill The DJ [Part Two] is the first official cd released by Optimo who are Jonnie Wilkes & Keith McIvor (aka JG Wilkes and JD Twitch) who have in the past given away free mixes to guests who have attended their weekly night of djing Sundays at The Sub Club in Glasgow.

In collaboration with the Kill The DJ night in at club Le Pulp in Paris, Optimo follow up Part One in this series which was helmed by Ivan Smagghe. Released on their own Kill The DJ Records as a subdivision of Tiger Sushi Records, Kill The DJ [Part Two] is a two cd set with one mix cd and one unmixed cd celebrating the goodness of the Optimo dj talents.

Kill The DJ have a whole group of artists who fit into a tight knit but expanding umbrella of talent with the likes of Ivan Smagghe, Chloé Clement, Joakim, K.I.M., Sir Alice and Optimo. Hopefully in time - thanks to 12 inch releases, cd mixes, compilations, remixes, free giveaways, downloads and actual events we will be able to hear these talents in their glory. Here on How To Kill The DJ [Part Two] we get the masterwork of Optimo in two forms.

The first disc is a mad party disc of classic music which veers from one genre to another and one artist to another in that perfect mix that only a DJ that truly loves music could afford.

It would be hard to sum up all the great parts on disc one because there's a whopping 42 tracks (all licensed) - sometimes with 2 or 3 tracks going at one time. But if you want to hear a mix by some guys who love everything from

This is just a sampling of what you will find on disc one - and if this sounds like a playlist you'd like to hear, check out disc one.

Disc two is a much more mellow affair. Unmixed, as well disc two digs even deeper into the ambient, the blues and the avante garde. In short, music that won't necessarily mix well in a dj set, but that is classic anyways and sets a great mood. This time around we get the likes of

This volume of How To Kill The DJ shows a love for the music with no pretensions. Music to love for years in the past and for years to come. This is the kind of digging that fellow djs will appreciate.