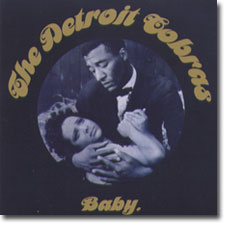 Detroit Cobras have a distinctive sound that this CD holds onto. The main component of their sound is Motown and Blues covers done with a fast rock and roll beat, and Rachel Nagy's smooth as silk but rough as nails voice.

Baby. follows 2 full lengths released several years ago, an EP released in 2003, and a handful of singles, all impossible to find unless you go to one of their shows and are prepared to pay a marked up price.

The 13 songs on Baby. are mostly covers. One of the songs is even a cover of their cover - they recorded Cha Cha Twist on their first album Mink Rat or Rabbit. But the one song they wrote is very fine. Hot Dog sounds as cool as any of the covers they choose. Hot Dog even has a cheerleader styled chant of H-O-T D-O-G at the end. Ko Shih of Ko and the Knockouts does background vocals on the disc

Just Can't Please You has a part in the music where all the instruments play three notes together to accent the vocals. It makes the song even more powerful than it already was. Special points go to Detroit Cobra drummer Kenny Tudruck, who plays in an animated way on stage, similar to Heather Dunn ( who drummed for Tiger Trap years ago), or Boston's own Bobby Bear, who has drummed for Willy Alexander for years.

My favorite track is Everybody's Going Wild, which moves with a Hot Rod pace. But I like the whole record. I think Baby. is particularly important because it shows the band VERY confident in their sound and style, and does not AT ALL sound like them imitating themselves - it is a great disc that should get released domestically (this copy was put out by Rough trade in England).

The Detroit Cobras in the gullbuy:

Ko and the Knockouts in the gullbuy: