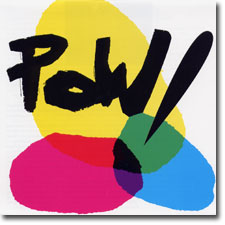 Pow! to the people is a 2 disc 28 band showcase for one of my favorite current indie pop labels from the UK, Track and Field. All of the bands played at Track and Field nights from 1999 on. The liner notes give a good summary of the label's origins as a dance night. From there it evolved to founders Steve and Paul asking their pals to play at unique venues all over London, with many indie music scene luminaries in attendance. Eventually the lads decided in their own words there was more to pop life than the throwaway world of mainstream, and the rest is history.

Great Waves Sister City (Norway Mix) has a modern keyboard intro before making way for a garage band that crashes the party. The riff feels like a tamer version of Hindu Love Gods. The slowed down riffs retain that early garage sound. It should go on a 21st century Nuggets or Pebbles compilation.

Of Montreal Everything about her is wrong is a bouncy bit of psych pop with some funny lines that are a little too easy to guess at she acts so sweet but that's a real trick, she is a most duplicitous chick.

Comet Gain Look at you now you're crying is the saddest song I've heard from them. Their rawness and passion always come through without overpowering their indie pop elements. The guitars sound a little distorted, and the singing is breathy and pouting, but insistent at the same time. The band plays like it's burst out crying even though she should be. The drums pound and the guitars wrap around her voice. This loneliness is sad and angry at the same time as she says you don't even know if you'll see him again or if he's waiting for me.

Butterflies of Love Mount Everest has a mid 80s feel, almost like Ocean Rain era Echo and the Bunnymen. The singing reminds me of the Red Rockers, with the backing melody vocals reminding me of Kevin Rowlands. It's the 80s moment of disc 1.

Mid State the boy who dropped his omelet wins the most original title contest for disc 1. Luckily the song lives up to the title's promise. It's fun bouncy pop that's modern with a 70s twist. The vocals just reach the higher notes and there are some unusual harmonies.

Dressy Bessy Hangout wonderful has a beat that will get your head bopping. Like Comet Gain, they have a similar approach of blending a little rawness in with their pop. It's a great combination as she sings sweetly over the music so hang out a little more because you're wonderful, it's beautiful.

Kicker Tomorrow always comes has some nice percussion at the intro and Laura's singing almost sounds jazzy. The band drops in after the mellow intro and the song shifts gears and heads for straight ahead 60s flavored pop with nice keys and horn arrangements.

Hey Lover by Aislers Set sounds like something the Ronettes recorded, with all the handclaps, yeah yeah uh huhs and 60s girl group harmonies you could ever want. It sounds like a cover, but it's credited to Amy Linton. Maybe she wrote it in a previous life. It's the most summery song on the compilation.

Ladybug Transistor Galveston has a countryish tinge with some cool keys and horn touches as a wistful soul pines for his old home and finds many east ways to rhyme with Galveston; twenty one, gun, run.

Town and country iv by Ashley Park has a lot of ideas for one song. It starts out as bouncy pop and slows down for the pining part as he drags out crying over you. It speeds up again but not quite like the intro and the lyrics take on a more sarcastic tone. I admire their ambition here.

Essex Green Pack your troubles sounds like a bluegrass tinged folk ensemble with a jaunty number. The best thing about it is the purity of the sound they have here and the sentiment. There is some fine strumming and fiddle playing and warm harmonies. It's a sing along that lasts long after the song has ended.

Woodchuck Hang on is a longing boy loses girl but hangs on anyway pop number. The female harmonies add a nice wistful feel. It's passes by pleasantly.

The Amazing Pilots You make me feel amazing has some breathy barely sung vocals as the band shuffles along, just making it to the end. I only wish they had come up with a different adjective in the title.

Disc 2 of Pow! to the people has some different sounds mixed in, making for some interesting variety.

Fonda 500 start things off with a blissed out psych pop number called Magic Sunshine Butterfly. The intro has the voices sped up. It sounds like either an Indian Rani singer or The Chipmunks. The singing comes back to earth and some great falsetto harmonies join in giving it a Super Furry Animals feel. They shift tempos, add a little glockenspiel and finish with a nice coda. There's enough song for all of their ideas.

On Kickstyle, the Olympic Lifts throw indie rock and hip-hop into a blender and press puree. The half rap and half singing are blended with scratch samples that almost sound real.

I am the World Trade Center The Postcard has an electro pop/dance sound that has enough of a groove to get you out on the dance floor. The synthesizer sounds remind me of early 80s synthesizer music from New Order and Depeche Mode. There is some soulful female singing about relationship implosion to give you something to think about while you're shaking your stuff.

Across the Great Divide (version) by Saloon starts with some 80s guitar riffs and a nearly rock feel with female vocals doubled over a synthesizer motif (or is it real?) that sounds like mournful strings. It gets interesting when after a neat bridge, it quiets down and what sounds like a toy xylophone pings over the buzzing and sad sounding synthesizers in the background. It has the most ideas in the one song on disc 2.

Annabel by Vermont starts with a buzzing synthesizer while the band makes its entrance from the background. A lone flute rises above as the drums sputter to life and the guitars wind their way around the singing all in time for the drop dead cold ending.

Cane 141 The Grand Lunar has a cheesy 80s synthesizer riff over breathy vocals. As more electronic sounds blend in, the theme emerges, a happier sounding take on There is a light that never goes out.

Home Science The Mother Superior Teardrop Factory wins the most original title for disc 2. It sounds like a homemade recording with acoustic guitar and yet another glockenspiel. Someone else is dusting off the same high school band instrument again?! The percussion sounds like it came from Chris Knox's cupboards. I like the charming singing and the theme of getting through the week.

The Tyde contribute a wistful number here How am I supposed 2. The lap steel guitar gives it a slightly country feel. The singing reminds me of a more tuneful Felt and here the ending is happier for a change, because the girl comes back.

Step into the Light by The Clientele has a slow quiet start with airy singing, and haunting imagery, as always ,won't you step into the light,won't you step out of the shadows. The brush drumming seems a bit off kilter and distracted. I had fun trying to figure out if that was deliberate.

Watch and Smile by Herman Dunne's wavering voice on Watch and Smile gets better when the harmonies are doubled over. It also has a homemade feel with acoustic guitars and low key steady rhythm.

Tompaulin Short Affair (version) has an intro with horns that sound like they came from an old recording. The cool sweet singing almost hides some scathing observations, a favorite device,your Catholic education makes you wish you were shot,you're happy in your office just as long as they don't know, It has the insistence of Comet Gain on Disc 1 (Look at you now you're crying). They took a different path.

The Loves True Love Will Find You in the End starts out with a slow beat accented by tambourine that harkens back to Just Like Honey by the Jesus and Mary Chain, minus the (lovely) white noise. There are some nice female harmonies and the slightly shaky vocals take me back to Dan Treacy from Television Personalities with, given the title, sentimental lyrics,don't be sad and don't you cry don't give up I tell you true love will find you in the end, You'll sing along, wanting to believe.

James William Hindle delivers a pleasant acoustic homemade sounding song You Will be Safe with endearing singing and ardent feeling.

Black Nielsen Our Little Family of Bears the second most original title on this disc has 80s synthesizers on slightly edgy female vocals and a steady but quiet beat. I'm trying to guess which way the singing will go as it gets smoother as some acoustic guitar gets added to the mix. After pausing for an almost false ending, the rhythm section returns and the song ends in a flourish of synthesizers and cymbals, a good closer.

other Track and Field Organization releases in the gullbuy: