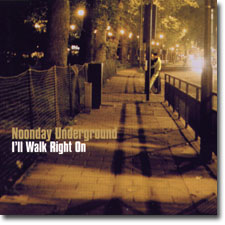 'I'll Walk Right On' is a three track (plus video) single from Noonday Underground's second album, 'Surface Noise.' I have never heard that record, as I have waited for it to be released domestically here in the US, as Noonday Underground are US artists.

Noonday Underground is centered around Simon Dine, who lives in New Jersey. His music is sometimes instrumental, and sometimes has vocals by Daisy Marly, whose voice reminds me of the 80s artist Yaz.

I'll Walk Right On features Paul Weller on vocals. The track is very upbeat and smooth. It has a Motown feel with a lot of soul.

The second track is a new mix of a track from 'Surface Noise.' Go It Alone is mixed by Mujaji. Mujaji are Seto & Thoth Shmack from Brooklyn.

The non-LP offering on the single is the Simon Dine instrumental March Of The Creepers. It is a cinematic styled track with sweeping strings and fluttering flute. There is an orchestral part that blends into the bass, drum, and percussion very well. Parts of the song have easy listening style wordless vocals that are probably sampled from some old record. There is a Magical Mystery Tour kind of pop-psychedelia feel to it.

The video for I'll Walk Right On has Paul Weller and a girl separately walking through Berlin with shots of the Fernsehturm TV tower. When Paul sites down he contemplates while shots of a flying seagull (gullbuy tie-in?) fill the screen. The video is adequate, but nothing worth buying the single for.

Noonday Underground in the gullbuy: