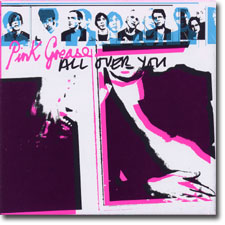 I think I'm developing a theory--it goes something like this: the latest breed of U.S. hipster fodder is influenced mostly by UK music and fashion. With their emphasis on fashion (and seemingly little actual grounding in music) they come up with records that may entertain but fall short in the Song category. There is also a seeming deficiency when they attempt to Rock.

When I first came in contact with Pink Grease's 6-song EP All Over You, I thought, "Ugh! Another crappy hipster band." (They even look like a bunch of dicks.) So of course I was terribly disappointed to find I liked the record. My aforementioned theory rests on the fact that Pink Grease are not a bunch of trust funders recently transplanted to Brooklyn or similar locale but are in fact from picturesque Sheffield, England. This is the part of the review where the reviewer is supposed to mention Cabaret Voltaire, Human League, ABC, Pulp, or even Def Leppard but none of those bands really have anything to do with Pink Grease so I'll just skip that bit.

Pink Grease play hectic, sometimes angular rock augmented with sax (c.f. the Roxy references to come) and someone fiddling about on a homemade synth dubbed Machine.

More Than Woman makes me think of an ultra amped-up version of Roxy Music.

Susie starts off brilliantly with a nice Grease (the musical) reference and carries along in a deconstructed sock-hop vein. In parts of this song, the singer veers inexplicably between sounding like Bryan Ferry and Jonathan Richman. Honest.

"Shake" is sort of like Red Cross' Burnout with bits of Rock Lobster grafted on. And the breakdown at the end recalls the darker shamblings of early Roxy Music.

Lou Reed is most remarkable for the band intros (and resultant solos). Who does band intros on a studio record? Perfect.

Apparently there's a full-length debut in the works and I am curious to see what results.