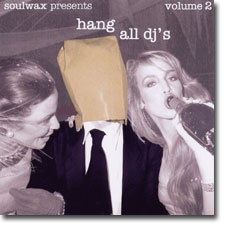 The second volume of the 'hang all dj's' series is more of a well chosen mixed compilation than a collection of bootlegs/mashups. Soulwax have chosen very few tracks from curent artists (Dexter, Kiki, Spiller, Agent Sumo, Copyright, Standards, Angie Martinez, Monsoon), and instead pulled some choice tracks from the disco era, plus the 60s, 70s, 80s and 90s.

Their craft is in the weave that they use to pull it all together. The attention to detail and the odd items used in transitions are what make Soulwax unique among artists putting together left-field compilations. Stuff is not added just for the sake of it. Every element seems to have its place in the finished product, and the feel is never cluttered.

Here is the track listing with some brief comments I have placed. If you can find this comp (or ANY in the series), my advice is to buy it. I still think that Soulwax is the best thing going.