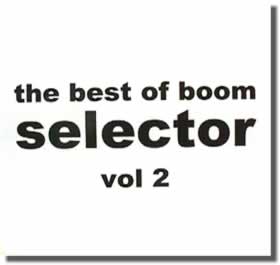 Volume 2 in The Best Bootlegs in the World Ever series (with a name change in this volume to the Best of Boom Selector - Volume One has also received this new name and a reissue as such).

I now truly understand the need for compilations aimed at the cream of the bootleg crop. Due to the wildly varying quality and quantity of the bootleg thanks to the do-it-your-dj-self nature of the beast coupled with the proliferation across the internet, there is the need to cull the best of the lot into a listenable batch of tunes.

I'm here to tell you that I think Volume Two may actually be the best that I have heard so far and most definitely is the most college-radio dj-ready thanks to the minimal profanity and mix to mix ratio. I found myself addicted to this disc - more so than any of the other's I've reviewed in the past - coming back to it again and again, cranking it up. There are various threads and themes that have begun to appear; what Run DMC's/Aerosmith collaboration hinted at in the 80s has truly come to fruition in this age of file-swapping.

1. soul wax - no diggity (Blackstreet) - Soul Wax take the Blackstreet song No Diggity and send it back to the early 80s sound giving this tune a new lease on life thanks to the old school Sugar Hill rhythms laid underneath. It's only too bad that one of the raps midway through contains some profanity because this one would have everyone rocking out in radio land.

2. conway - lisas got hives - Conway mixes Main Offender by the Hives and The Block Party by Lisa 'Left Eye' Lopez for one of the best cuts here. The Hives tune just gets more chaotic with Left Eyes party-down attitude. Sure to be a hit on every street corner.

4. ultra 396 - rock the party - (The Clash - Rock the Casbah/Pink - Get The Party Started) - Another favorite for me - what I love about this is everytime I hear it I get not one but two songs in my head - at the same time! It really points out the dub aspect of the Clash tune.

5. picasio - craig the survivor - (Survivor-Eye of the Tiger/Craig David - Fill Me In) - This is so rocking - combining soulful rap drivel with cheesey rock-n- roll and it works perfectly!

6. kurtis rush - enter the bitch - using Missy Elliott's She's A Bitch combining a metal rock tune (I know it but can't name the source) and a bitchin' Missy tune - perfect for cussing out people when you are driving around - contains minor profanity.

7. sound hog - take it easy freak - This is pretty much the perfect bootleg tune using Adina Howard's Freak Like Me and giving it a power rock feel - it totally sounds like a new song - powerful stuff.

9. picasio - really like it - (Herbie Hancock - Rockit/DJ Pied Piper & The Masters of Ceremonies - Do You Really Like It) - Something we probably won't know in the USA - because it is a two-step UK hit so it didn't do much for me but there is the interesting addition of what sounds like the King Singers at the end.

10. soul wax - body movin' - Finally the Beastie Boys get the bootleg treatment - with a James Brown type funk added to Body Movin' which totally works - and with no profanity so it is quite playable on college radio.

11. dj clencher - kylietron - mixing Kylie and Ladytron - Playgirl gets a new lease on life with another electro rhythm.

12. mighty lord fenn - the power of the bizket - starts with profanity - pretty annoying too - Rollin' (Air Raid Vehicule) by Limp Bizkit with an 80s song - I have not liked any Limp Bizket bootlegs.

13. osymyso - johns not mad - This one contains profanity - an 80s rhythm with a bunch of samples over top about being crazy.

14. freelance hellraiser - public prince - Combining Prince - 1999 and Public Enemy - some profanity. I wasn't crazy about it.

15. soulwax - dreadlock child - Independent by Destiny's Child with a reggae rhythm - this one really worked - and I believe it was also featured on 2 Many DJs.