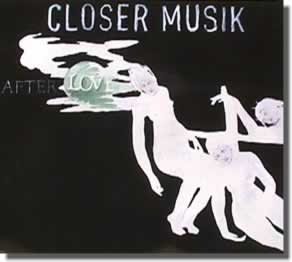 People called New Order's 'Everything's Gone Green' ultra-modern ergonomic music when it came out in 1981. That same description fits Closer Musik, who throw a taste of Depeche Mode and Soft Cell into their sound as well.

After Love is a great record. It is more song oriented than other Kompakt releases I have heard. In recent gullbuy reviews I compared Closer Musik to Borneo & Sporenburg and Nikakoi. These artists make music that has a beat you could dance to, though the lyrics have themes of isolation, not togetherness.

Album opener Closer Dancer starts with a whispered 'get closer,' but the song really sounds like it is written to someone the writer is watching, not dancing with. In fact, it might be written to a dancer in a strip club ('never touch, always near').

Closer Musik is Dirk Leyers and Matias Aguayo. Their music is purely electronic, with sounds that are as sharp as anything on the Shitkatapult or Bpitch Control labels. This music could easily be the next step for people who grow bored with the increasingly formulaic electroclash sound. The sound they make is sexy, detached, produced to a sparkle, and filled with attractive sounds.

There are four songs with male vocals, and four instrumentals. My favorite song on the album is one of the instrumentals, Mir. Mir sounds great played loud. It has a dry crisp sound that cuts sharp. Mir is sandwiched between two standout vocal tracks, Ride and You Don't Know Me.

Ride is very chilled out, while You Don't Know Me has the alienation theme started in the albums opening track Closer Dancer. Ride is an eight minute track which seems to challenge a lover: 'ride me, ride me baby, ride me, make me feel.'

You Don't Know Me appears on the record twice. The full nine minute version follows Mir, and the three and a half minute radio edit closes out the disc. You Don't Know Me is catchy enough to deserve a radio edit. 'I love water on my skin, I love to lean against the wind, I love to walk alone at night, I love the city lights, cos I'm lonely, but I'm not the only one. You don't know me.' The song details all the pleasures which exist for the self contained person writing the song.

In the 80s there was a term to describe self obsessed people. 'The me generation' was the term coined for these folk. Closer Musik are not members of the me generation, as they do not blab on and on about themselves to others. If I was to base my knowledge about them from this record, they would be the people who remain invisible on the city street or club. Like the finest Street Rods (cars) of the 70s, they are the 'fake outs' - those who appear regular on the surface, but carry hidden complexities and strengths not obvious to the casual observer. After Love allows us to enter Dirk Leyers and Matias Aguayo's minds, with their thoughts wrapped in ultra-modern ergonomic music easy to enjoy.