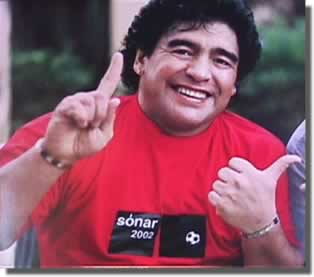 Each year the Sonar Festival takes place in Barcelona. The people who go there get to see many well chosen bands. The people who don't, get to buy the compilation Sonarmusic puts out each year for the festival.

Compilations like the All Tomorrow's Parties series have used Sonar's yearly comps as a model for their own. And why not? Here is a two CD set for the price of a single disc, with studio tracks from many of the artist's latest records. While none of the tracks are unreleased, I doubt that anyone can listen to these comps without finding some new favorite by an artist you may have heard of, but never bought any records by.

As I read the review I wrote last year for the 2001 disc, I notice that the format is the same (Sonar by day, Sonar by night) and Luomo has a track on the 2001 CD as well as this one. The Sonar by night CD also starts off with 2 Brazilian styled songs this year. Wagon Cookin' do 'Mar' and Brooks do 'You, Me & Us.' I never heard of either of these artists, but I enjoy the cuts a lot. They are both female vocal tracks with nice percussion and smooth beats.

They are followed by the Luomo track 'Tessio (MRI remix).' This version was only on a Force Tracks 12inch I never bought, so I am glad to have it here. Luomo is Vladislav Delay's house project. He just released a new Luomo 12inch, and is due to release a new CD, both on Force. I like Luomo best out of all the projects Vladislav Delay has put together. I would have already bought the new 12inch if I knew that the 2 tracks would not be on the CD.

Aside from these three tracks, Sonar by night is a pleasant listen, but not the CD I will grab out of this set. Sonar by day has lots of great stuff.

Coloma start off the CD with a song that reminds me of Zoot Woman - very 80's dramatic male vocal, and not really my thing.

Bomb The Bass & Lali Puna stormed through everyone's consciousness last year with their collaboration single on Morr Music. That wonderful track is here. 'Clear Cut' sounds just as fresh now as it did when it came out.

The Crossover track Sonar chose for this comp is 'The Great Katanza.' It is well chosen, as it has male vocals and avoids the Chicks On Speed sound that Crossover used on several tracks of their full length. I think that many people (including myself) have not spent much time with this side of Crossover. When he says 'the great Katanza' it sounds like 'the great pretender,' The track was reminding me so much of the 1973 Neil Young song 'Yonder Stands The Sinner' from his 'Time Fades Away' LP that I had to did out that LP and listen to the lines 'I guess you heard about the great pretender - I went to see him and he's not the same.'

The Ellen Allien track 'Erbeermund' (Strawberry Lips) is a s good as anything you will hear this year. It is also on her latest 12inch.

Soul Center is Thomas Brinkmann's house project, in the same way that Vladislav Delay does the Luomo project. I love all three Soul Center records, and enjoy 'A Good One' being included here.

Static is an artist I have never heard of. Their track 'Headphones' sounds a lot like Tarwater, and is one of my favorites on the CD.

The ALWAYS delightful duo Donna Regina have a song from their latest CD 'Northern Classic' on this disc. 'Driftin' Around' is a jewel of a cut. Aside from inquiries about where to find the 'Best Bootlegs in the World' CD, the most letters I get to the gullbuy are about Donna Regina. Their discs remain hard to find in stores, so Sonar 2002 should be especially useful for these folks to buy.

Also on Sonar by day are Arto Lindsay, Nikakoi, Cex, Fantasias Animadas, Jeff Mills, and Yo La Tengo. Out of these tracks my fave by far is the Fantasias Animadas track 'Edificio.' I would love to find more by them. 'Edificio' is a sharp, upbeat instrumental with bright electronics.

I was not so crazy for the last three quarters of Sonar by night, but as a whole the set is a great Summer listening collection with many individual gems.