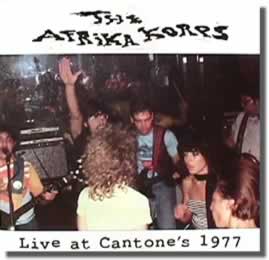 There are seven acknowledged wonders of the world ...You are about to witness the eighth... I still can't believe this recording even exists. Some kid must have 'borrowed' a reel to reel deck from the local high school a/v dept. for the weekend, lugged it down to Cantone's ( an italian restaurant/bar lost deep in the old Boston financial district) hit 'record' and just let the tape roll.

What we got here is a broiling hot club packed with Boston musicians and celebrities: Reddy Teddy, the Boom Boom Band, DMZ, Baby's Arm, Thundertrain - we were all there that evening to mark a very special occasion. My hometown pal from Holliston, Linda (who had gone on to become the notorious 'Miss Lyn' editor of the 'Boston Groupie News')- had just gotten herself hitched to Krazee Kenne Highland USMC, leader of The Afrika Korps. Everyone had been following Kenne's career from afar for over a year and his earlier indie hits with the infamous Gizmos out in Bloomington IN were well known all over the Boston underground.

Tonight we were partying with the newlyweds as well experiencing the stage debut of Highland's new band: The Afrika Korps. The Korps was an 'elite army of volunteer musicians, unflinchingly committed to the sole mission of destroying disco.'

Joining songwriter/singer/guitarist Krazee Kenne onstage at Cantone's on August 21, 1977 were New Yorkers Solomon and Jay Gruberger. Solomon (guitarist/singer/songwriter) and his 16 year old brother Jay (on bass and vocal) made history (at least at our Thundertrain band house) with their stunning O.Rex band maxi-single from the previous year. Rounding out the multi-state quartet was drummer Kenny Kaiser of New Jersey.The Korps were also aided that night on vocals by Martha Hull of Washington DCs Slickee Boys, another ground breaking '76 punk band, and Gizmo Rich Coffee.

The Afrika Korps invades the sweat box Cantone's stage and proceeds to bulldoze the slack- jawwed crowd with a droolworthy set of supercharged punk and garage rawk. The Korps hammers us with some beauties from their debut LP Music To Kill By gems like 'Fox Lane', 'Jailbait Janet' and 'You're a Tease Baby'( reissued on cd in 2001, Gulcher 405).

The AK team continue to entertain with the O. Rex classic 'My Head's In '73', the Gizmo hit 'Amerika First' and the Slickee Boys cover of 'Heart Full of Soul'. The Korps then take dead aim at the evening's Boston crowd with faithful versions of Willie Alexander's 'Hit 'er With The Axe' and Thundertrain's 'Hot For Teacher!' The Afrika boys score another direct hit with their take on 'At the Rat' from the 'Live at the Rat' album that many of us in the beantown audience had performed on and were promoting at the time.

Titillating lyrics and bombast abound- but- the Afrika crew stay on course throughout the frantic set. The rhythm section impresses- the late Jay Gruberger a standout with his trademark Suzy Quatro basswork. The detail, thought and care that the Korps inject into this set is instantly apparent.

The highlight for me is the interplay between the Afrika Korps and their adoring audience, the tape just keeps a rolling and we hear it all: boasts, put-downs, in-jokes and always the laughter. This is a rare relic of a brief instant when the vanguard of the DC, New York, Mid-West and Boston punk rock underground communities all joined together to celebrate the new culture we were all creating together.