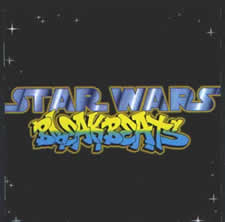 I really enjoyed this disc. It is a 25 song extravaganza put together by Morgan Phillips with beats over samples from the original Star Wars movie.

All of the best passages of the film are given a track to shine in loops and collages that bring them into even sharper focus.

Supposedly George Lucas himself has been trying to suppress this since it initially appeared in 1999 in NYC. Mr. Lucas should lay off - this disc is a lovingly crafted. It should honor him that it exists.

The booklet in the CD has 6 color panels of Star Wars figures set up in scenes from the movie. The booklet is almost as good as the disc itself!

I love most of the tracks, but especially 'I Got A Bad Feeling About This', 'Space Beauty' with the first transmission heard from Princess Leah: 'Help me Obe Won Kenobi - you're my only hope'.

Boba Fett's 'A Bobadelic Relic' is as great as you'd hope, as are all the tracks of your favorite heroes and villains of the saga. While indigestible as a whole, a little taste of this CD will make even the grimmest soul smile, guaranteed.

by the same artist: