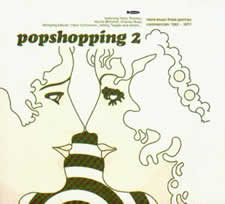 The first Popshopping compilation was such a kick that it is hardly surprising that someone decided to revisit the idea with a second volume. What IS surprising is that the quality level remains so high.

If you enjoyed the first volume in this collection of 60s and 70s German advertising jingles, you will enjoy this second volume as well. The cuts have a finger snapping hipness to them. They are like library music made to be noticed, instead of being created to blend into the background of whatever film leased their use.

Branding through music. I love the sexy 'Miss Fenjala' track made by Claudio Szenkar in 1974 for a Johnson & Johnson ad. You don't get 'em made like this today!

BMW's 1970 Peter Schirman ad has a Ennio Morricone feel through the harmonica used in it. Many of the cuts have a strong go-go feel, such as the sterling 'Super-Nowa-Jingles' by Charles Nowa from 1965, used through 1972.

The Yardley ad 'London Look' from 1967 mixes talking and music. 'Die Deutschen Bullen - die Kraft und der Fortschritt' from 1969 is a fun one, credited to artist unknown. The James Bond styled 'Der Mann mit der Goldenen Hand' must have slayed 1970 when it was released as an ad for Edeka.

'Shoe Shoe Twist' was a 1962 ad for Servas Schuhe. It is wild. I'd buy a pair! These tracks were just my favorites - there are many more fine cuts on here that you may come to love.