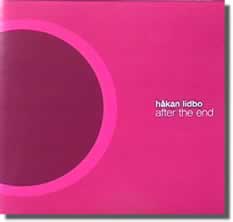 Håkan Lidbo is an artist I am always curious about. I have seen US release 12inch singles that look almost mainstream in his name, I have heard (and reviewed for the gullbuy) his tech-house album Tech Couture on Steve Bug's Poker Flat Recordings label. I have smiled along with his album and 12inch as the fictional lounge legend Bobby Trafalgar. I have enjoyed his minimal 06.10.60 CD on the French label Mitek, and now I am experiencing his abstract electronic music After The End, released on the Danish label April Records.

After The End has 13 songs split into five parts.

Håkan Lidbo has released so many types of electronic records that you can only classify him as 'Håkan Lidbo' in the end. After The End (is the title referring to the hidden clip?) is an interesting piece of music which sounds like Smash TV without the beats, or Autechre with smiles.

other Håkan Lido reviews in the gullbuy: