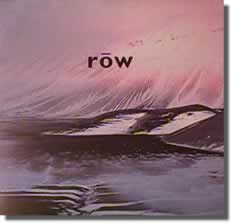 Thomas Brinkmann is here to save the day with another stellar compilation culled from numerous 12 inch vinyl, cd, and unreleased recordings, which only Brinkmann can bring to us.

The thing for me that raises Brinkmann above artists with a similar minimal dub sound, is the fact that Brinkmann always keeps things moving along with a great beat - never falling flat with something that is too cerebral. Brinkmann may be able to do this so easily because he not only has a great ear for what makes a track move in a funky way sort of like his Soul Center works (but without being so overt about it here) as well as in a rhythmic way.

He is also able to combine fun samples with an intelligent sound which makes for enjoyable and repeated listens. Row is the latest compilation to mine his varied output, and includes an excellent sampling, even including some new versions for those who might have already collected the original releases, and it will keep even the most jaded electronic music fan happy.

10 tracks total, and Thomas Brinkmann definitely rises to the occasion and he does not disappoint on this stellar collection of his work.