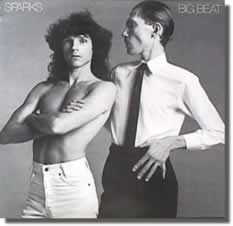 Japanese re-issue of Spark's 1976 LP which originally was released after the classic trilogy of Sparks records: Kimono My House, Propaganda, and Indiscreet.

Big Beat has a simple sound instrumentally similar to Iggy Pop's record Lust For Life. All the songs rock with a big beat and metallic guitars. In 2003 many of these tracks sound A-OK to me. The sound is much more stripped down than previous Sparks records. I believe that Sparks had their ear to the ground and saw the emergence of the Punk movement.

The song Throw Her Away (and get a new one) sounds like stuff from the first Clash album in places. I Want To Be Like Everybody Else is the first of my faves on the LP. It almost sounds like Toy Dolls in places.

Everybody's Stupid is a track that perfectly expresses the frustration we all feel at work or around town, when you just have to put it on the line. In fact, most of the lyrics on this record are cynical observances of what Ron and Russel Mael saw around.

Screwed Up says 'I knew you when you weren't a bit screwed up, now what you got is spreading around.' White Women sounds most like older Sparks. It has a black sense of humor. 'The places that I'm cruising, the places that I stay, are filled with Anglo-saxons, and I get my way.' This is funny coming from two men who are camp and seem more like partners than brothers. I love this song, but could see how people could perceive it as offensive.

The song after White Women continues their statement of intent quite plainly. I Like Girls is a celebration of heterosexuality sang by this pair of stylish men who always pose together as a couple, and who dressed as geisha for the cover of Kimono My House. 'No one is restricted no one is tied down, But the Greece of old collapsed 'cause no one like their girls. We won't have that problem I'm doing my part, No one asked me, but I'll answer, I Like Girls.'

This Japanese re-issue contains two bonus tracks I had never heard. Tearing the Place Apart sounds like it would have been on Indiscreet. The song it sounds most like from Big Beat is I Bought The Mississippi River. Both songs have a ragtime sound and both work well! The second bonus song has vocals that sound very much like Olga from Toy Dolls.

Gone With The Wind is a camp romp with oboe and interesting embellishments, including a barbershop chorus that appears near the end. Ron Mael's keyboard sounds like something Brother Cleve might play. This is a real treat for a Spark fan. It is a top quality track I can't believe I had never heard.

If you like Sparks and you do not know this record, you have work to do. Big Beat is not a second string album (like its follow up Forever Young). Big Beat is immediate and sharp. And it sounds great today.

other Sparks records in the gullbuy:

A Woofer in Tweeter's Clothing