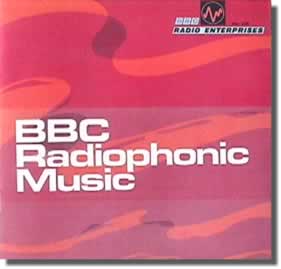 The BBC were not only known for the myriad of sessions recording by the likes of John Peel, they also had what they called the BBC Radiophonic Workshop.

This department of the BBC recorded the electronic music used in many a British tv show, including the only one that I had known of well, the theme from Dr. Who (also reviewed in the gullbuy - read review), which had its original theme song recorded by the BBC Radiophonic Workshop.

If you know that theme song, you actually have a good idea of what this compilation of the BBC Radiophonic Workshop is like, though this particular recording was made in 1968 and concentrates instead on lesser known themes, and in a way is more intriguing because of this. So while hearing the Dr Who theme might retain some kitsch value, here we have obscure electronic recordings with no ties in our mind, which helps eliminate the kitsch value (while others, perhaps from Britain might feel the reverse and have flashbacks of some sort).

Remarkably, these recordings sound fresh and vital today, thanks in part to the resurgence of an interest in recordings done via magnetic tape, or analogue electronic recordings by the likes of the Aphex Twin. This music borrows heavily from the musique concrete recordings of the likes of Pierre Henry but also has the charm of Joe Meek.

The composers of the electronic works here include John Baker, David Cain & Delia Derbyshire - Delia was also featured on a recording near and dear to my heart (and perhaps others too) the White Noise album called 'An Electric Storm,' which was a psychedelic masterpiece originally released by Island Records in 1969 and was quite sought after until its re-release on cd (and is in the WZBC library). In likewise manner the original BBC Radiophonic Music LPs are quite sought after rarities. So I figured anything with Delia Derbyshire involved must be good and with these BBC recordings, this is definitely true.

My favorites on this cd include Radio Nottingham (track 2) by John Baker which has a nifty Joe Meek melody and could almost pass for a rock tune - a lot of fun.

Track 4 Mattachin by Delia Derbyshire is also a quite playful theme, reminding me of the toy electronics which is so popular as rhythms these days.

Track 5 Pot Au Feu by Delia Derbyshire has a more spooky and tense feel to it as it creeps in, and it has many interesting parts to it, almost like electronic jazz meets Kraftwerkian rhythms.

Track 9 Blue Veils And Golden Sands by Delia Derbyshire has gonging ambient percussion and eery synth melodies hovering over top and is quite effective.

Track 13 Christmas Commercial by John Baker is a fun Christmas novelty because it is a version of Oh Come All Ye Faithful played on a cash register (talk about xmas commercialism!).

Track 15 The Delian Mode by Delia Derbyshire is another incredible ambient piece which sets up a drone and keeps that mode going through its 5 minute length.

Track 18 Milky Way by John Baker has a perculating rhythm and a funky surf guitar melody and is quite nice.

Track 19 Structures by John Baker has a high pitched ambience, which reminds me of the ambient Aphex Twin recordings but if he were more analogue electronics.

Track 22 Festival Time by John Baker is short also and sounds like a lounge rhythm that Saint Etienne would use.

Track 23 The Chase by John Baker has a sophisticated rhythm and a surfy guitar melody, and some wonderful echo added to the whole proceedings in the last moments.

Track 28 Door To Door by Delia Derbyshire is a fun little piece which uses doorbells melodically.

Track 30 War Of The Worlds by David Cain is a multi-part 5 minute epic ambient piece, with a creepy outer space melody and all sorts of static and screaming noises not unlike early Pink Floyd.

33 tracks total, all sorts of great sounds, and a wonderful addition to any electronic music collection. Stay tuned next week for the second review in the BBC Radiophonic Workshop reissue series.

gullbuy review of The Radiophonic Workshop