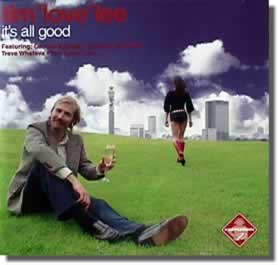 Tim Love Lee has released three records that I like, and runs two labels: Tummy Touch and Peace Fest.

Tummy Touch puts out lots of bass heavy rhythm-centric stuff with a touch of disco and lounge, including records by Los Chicharrons and Tutto Matto - artists I really dig.

The three records by Tim Love Lee are 'Confessions of a Selector,' 'XXX-Mas Selection' (a six song EP), and 'Just Call Me Lone Lee.'

In 1983 as a teenager he even played organ (under his real name Nick Glennie-Smith) on the Katrina and the Waves classic 'Walking On Sunshine.'

It's All Good is his first mix record, and I like it very much. It has a lot of different sounds and a very up feel. Like the stuff he releases on Tummy Touch, It's All Good has selections which cause you to jump around and get excited. There is no chilling out anywhere on this comp.

The CD starts off with 'Singalong' by Treva Whateva. The song is based on an acappella part backed by a tight beat. There is a brief bit of piano that reminds me of the Dolly Parton song '9 to 5.' The song is a real pink me up that sets the tone for the rest of the comp.

'Jogi by Punjabi MB is a bollywood styled track which Tim Love Lee introduces by blending the song in and out of what sounds like tuning a radio. Tim Love Lee added drums and bass below the track. You can hear how tinny the vocal sounds on top of the meaty rhythm. The combination works fine, and the song as a whole gives energy to the listener.

'Funk Trip' by Kelly & Yates has a disco/funk feel and is another party-out track with a wordless vocal, horn parts, and the trademark funk guitar sound. The requisite whistle even appears at the end.

'Sunglasses' by Geezers of Nazareth sounds like J-pop by Mansfield or Losfeld, except for the vocals. I didn't like this song much at first because of the vocals, but it ended up going through my head after repeated listenings.

'Me & Me Princess' by Lightning Head is my least favorite cut on the disc. Some may really like this track, but I am not crazy for the modern dancehall style vocal of current Jamaican artists such as you hear on Greensleeves (a Jamaican record label) compilations. The song itself fits right in with the rest of It's All Good. It has lots of energy, and a strong rhythm drive.

'Serious Trouble' by Zongamin is the first of my faves. It is an instrumental that kicks with all manner of percussive embellishments and a cool bass part. Zongamin places a break in the middle of the track where he uses a dial tone. In the second half of the cut he brings in more sound effects and keeps the pace as brisk as the drum beat.

'Export' by Silvio & Cortley sounds like an amped up police chase theme from a 70s TV show. It works quite well and fits in with the all over the place, all cooking feel of the comp.

'Cocaine, Swimming Pool' by The Turing Test is an instrumental with an extra strength bass/drum rhythm topped by a whooping sound that gives the song a nervous feel. There is a steady synth tone cutting through the proceedings like a plane cuts through soft wood. I like the track a lot, but the nervous sound works just a little too well on me.

'On Holiday' by Royal Appointment has a cartoon feel like the 'Elephants On Parade' song from Jungle book. In 2000 Pussyfoot Records put out a compilation called 'Pussytoons' which had artists using cartoon sounds in their songs. Howie B., Fantastic Plastic Machine and Jacknife Lee were among the 13 artists on the comp. The song by Royal Appointment would have fit fine on that comp, as it fits quite well here on It's all Good.

Next is an exclusive track by Tim Love Lee called 'Touch It.' Touch It is an instrumental with bongo and (of course!) a strong rhythmic element. It has a sine wave increasing in intensity part similar to what Vitalic used on his Poney EP. The second half of the track has race car sounds and some vocal samples tucked in the many layers of the track. Touch It is one of my faves on this comp.

'Gas Lamp (Tim Love Lee remix)' by Sunglasses After Dark continues the feel of Touch It. All the songs on this comp are mixed together, though there are logical break points between the songs which are marked in the CD's song numbers (so you can play just one song without it sounding like you abruptly cut in to a party mid way through).

If you think Groove Armada has no place on a compilation like this, you had best check out 'Disco Insert' by Groove Armada. This track originally appeared on a split 12inch with the Tim Love Lee song 'Again son,' which itself was one of the highlights on his 'Confessions of a Selector' LP. Disco Insert is one of my faves on this disc, with female vocals, percussion, snapping Chic styled drum and bass parts and a funky mix.

'Like U' by Gramme has almost the same elements as Disco Insert, though the female vocalist has this helium sounding voice that makes the song even more intense. What a track! Playing the Groove Armada and Gramme tracks together is a blast.

'Champagne Beat Boogie' by Boozy & Swann drops all pretense and keeps the beat straight disco. At this point you are either with this record or against it. For me, the last third of It's All Good is where the action is happening. Tim Love Lee added a little bit of everything in the beginning of this comp. The last third is thematically much more consistent, and it IS all good as well.

'Bite This' by Skylab is the last of my favorites on this comp. Skylab have a super immediate track made out of samples of many things including a metal rock guitar. It is put together with the same bass centered groove that Trevor Jackson uses on all the Playgroup stuff.

Bite This segues into '5:30am' by Tim Love Lee. It is only 40 seconds long, so you can't really call it a song. '5:30am' is a sample collage that includes a sample from Meatloaf's 'Paradise by the Dashboard Light.'

The CD ends with 'So You Said' by Jung Collective. This song has a lounge feel with a dance beat. 'So You Said' sounds like it could have been on a Tim Love Lee record. The song is a neat ending to a very strong comp that is much better than I had thought it would be.

Tim Love Lee in the gullbuy: