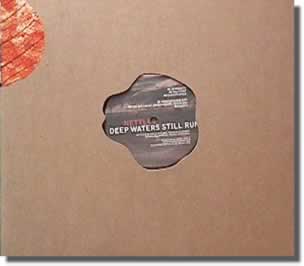 Nettle is Jace Clayton (aka DJ/Rupture) and DD. Both are, I believe, living in Barcelona Spain right now, but Rupture used to live in Boston and was part of the Toneburst Collective.

He has released two incredible mix cds, last year's Gold Teeth Thief on his own Soot Records and recently Minesweeper Suite on Tigerbeat6.

Gold Teeth Thief has been recently reissued due to high demand. What makes DJ/Rupture so special is his ability to blend breakbeat, jungle, dancehall, hip-hop, industrial, and even 'ethnic,' 'street' music so beautifully. I say 'beautifully' because 'seamlessly' is not the right word.

Rupture's mixes are not seamless; they are assaulting, abrasive, at times unnerving. One of the reasons, perhaps THE reason, for this is Nettle. Both Gold Teeth Thief and Minesweeper Suite rely considerably on the powerful quality of Nettle's output.

I would argue that Nettle is a distillation, a concentration of Rupture's talent. Heavy breaks twist over a thick bed of industrial sounds, sculpted perfectly by Rupture and DD, always on point, never awkward. Beats from Spain and North Africa, Middle Eastern raga sounds, manipulated hip-hop samples all work around and through each other, each reinforcing the next.

The 'roughness' of the whole has a political quality. This is revolutionary music without vocals. It is a people's music the likes of which you've never heard.

Deep Waters Still Run begins with my two favorites from the EP, Serranito and Halfstep. Serranito is included also on the full length Nettle CD, Build a Fort Set That On Fire (named after a Basquiat painting). Industrial bass pulses leave space for raga music that evolves into North African vocal sounds that are quickly manipulated, merged with the noise going on underneath. Halfstep develops with a similar industrial groove adding tabla drumming to the mix.

Side B of the EP is equally pleasing. Favorites include the records most fragmented, noisy track, The Ballad of Jimmy Hollin - Disco Mix. This track has no breaks; it develops over noisy bleeps and ends with a neat Method Man sample. Duppy, the last of the 6 tracks, is one of the noisiest, quickly speeding up into a mechanical crescendo of caterwauling breaks.

If you've not heard Nettle, you need to. At least check out one of DJ/Rupture's mix discs for a sampling of what Nettle has in store for the globe. The Agriculture has just released the full length Nettle disc called Build a Fort, Set That on Fire, and the group has another EP, Bin Scrape Laden, out on Soot. Do yourself a favor and look out for this stuff.