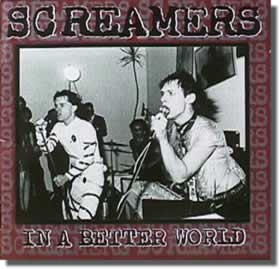 The Screamers are one of those bands that I've heard about for years and years but never actually HEARD until this double CD compilation. This is due, in part, to the band never releasing anything. Not an album, not an EP, not even a split single. Unusual, considering that from 1977-1981 they were one of the shining lights of L.A. punk. (Hell, the friggin' Germs were PROLIFIC compared to the Screamers and they weren't even around as long!) Even more unusual was the complete absence of guitars from the band; the basic Screamers line-up was two keyboardists and a drummer.

Despite their lack of guitars, make no mistake: the Screamers were a punk band tried and true -- not in the sense that Devo were punk; the Screamers were abrasive and they rocked. While some refer to them as 'techno-punk,' I think that's a bit of a misnomer. The live drums, to me, keeps them from sounding electronic, as does the liberal use of electric piano as a rhythm instrument. I guess the MAIN thing that keeps them from being techno-cold is singer Tomata du Plenty's (R.I.P. 2000) impassioned vocals.

It is the greatest of pities is that they never properly recorded. All that exists are recordings of live shows and a handful of demos. The material on In a Better World spans the years 1977-79 and is culled from numerous live shows and two different demo sessions.

I can't pick favorite tracks from this album. It's all too good. If I was given three wishes tomorrow, I would gladly give one of them to have even just ONE well-recorded, well-produced studio album from this band. They are everything I've heard about them and more.

No Screamers review would be complete without mentioning THAT illustration by Gary Panter, done for a flyer of theirs. It's a stylized rendition of Tomata du Plenty and you've seen it. EVERYone has seen it.