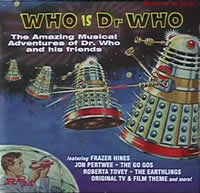 Whenever RPM puts their mitts into an artists career, a thorough compilation comes out.

The 6 songs I love on this 18 track Dr. Who compilation are not among the versions of the trademark Dr. Who theme which appear on this disc.

Is it getting close to holiday season again? I doubt you could do better than to play the 1964 song I'm Gonna Spend My Christmas With a Dalek (3) by The Go Gos (not the 80's LA band). The 17 year old vocalist Sue Smith sounds like a French accented ye ye girl, and a Dalek talks in a robot voice.

Landing Of The Daleks (4) by The Earthlings sounds like a cross between the Thunderbirds theme, a Morricone track, and the theme from Batman.