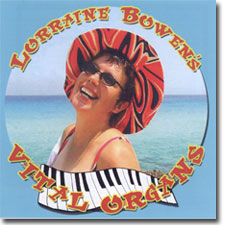 Vital Organs is the fourth album from Lorraine Bowen, who arrived on the scene in 1996 with The Crumble Song on a Volume compilation called Misfits. The Crumble Song has remained her signature song, and has been reprised on every album she has released since, including this one.

There are many great songs on this CD that have the same "written and recorded in an hour" magic as classic such as Van McCoy's The Hustle, Focus' Hocus Pocus, or Edgar Winter Group's Frankenstein. Each were recorded almost spontaneously, and became massive hits through the immediate appeal of them. Lorraine's songs have immediate and lasting appeal. She sings about common people in common situations, but with an eye that looks at the situation a little differently than you may have before.

Manhole! is my favorite track on the disc. It is a warning song about an open manhole cover she spotted on the way to work, but it is also an epic that has an infectious tune.

Fun to be a Fish could have been a song in the 60s Don Knott's move The Incredible Mr. Limpet. It is a great song suggested how uncomplicated your life would be if you were a fish.

Nothing Beats the Sound of Bossa Nova uses the sound Lorraine seems most comfortable with - the casio bossa nova. She mentions and gives small tastes of dozens of genres of music, with the chorus bearing the title of the song in a celebratory tune.

There are lots of great songs: Pizza Song has an almost Electroclash feel, but with smiles. LA Stars chronicles Lorraine's ill-fated trip to LA to try to get signed by a label.

Vital Organs is the first new record in 5 years - an eternity in the world of pop. Not only has she returned with the goods, but now she has fans all over the world. Two of them, Darren Walsh and Mike Booth, made a video for The Burger Song, tacked onto this CD as a bonus.

The song talks about how we don't really know what is in the meat in a burger, suggesting that tongues and testicles are what we are eating with our dill pickle. The video is a great compliment to the song, and the song itself only appears on the video.

Buy Vital Organs! It is a great disc and will introduce you to an incredible artist with 3 other CDs well worth purchasing.

Lorraine Bowen in the gullbuy: