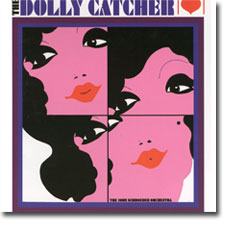 The Dolly Catcher from 1967, also subtitled Music to Catch Dollies By, is an easy lounge album from The John Schroeder Orchestra that looks like a soundtrack but is really just a collection of easy covers with a handful of originals. The songs supposedly all have a girl chasing theme, but its just a selection of tracks put together loosely with that theme but with no real connection between them.

John Schroeder previously worked in Sounds Orchestral, a group who had a hit in both the US and UK with a cover of Vince Guaraldi's Cast Your Fate To the Wind. He is also known for his funky cover of Black is Black from the Space Age Soul album and for penning the number one UK hit Walkin' Back to Happiness for Helen Shapiro.

Schroeder works with John Cameron here, keyboardist and arranger on Donovan's Sunshine Superman and Mellow Yellow; the KPM library records - Afro Rock, Jazz Rock, The Trendsetters, Voices in Harmony, and Themes Suite/Mustang; the World Of Oz album; the groovy Ella Fitzgerald album Ella from 1969; and as the composer of soundtracks like Psychomania. Cameron adds his keyboard work as well as his more classically bent string arrangements for some much needed zing.

Select tracks from this sought after album have appeared on some compilations, including Explosive Corrosive Joseph on the Ocean's Twelve soundtrack and But She Ran The Other Way on Easy Project: 20 Loungecore Favourites. Also, Explosive Corrosive Joseph appears on the 2 cd Soul Coaxing: The Many Moods of John Schroeder collection, but since that collection is so all encompassing, it's actually the only featured song from this album. So for those interested lounge collectors, this Radioactive Records release is a nice way to get this hard to find album, albeit as a bootleg without remastered sound quality.

The songs have a smattering of vocals, but are basically instrumental. The album is split between covers and originals, with originals winning out as best material here. The first track and title track, The Dolly Catcher, sounds like a theme song to a movie called The Dolly Catcher. The other good original, But She Ran The Other Way has a tense piano driven beat with a building, organ drenched melody.

Softly Softly Catchee Dolly is not quite as successful as the title track, sounding like an instrumental track for a Petula Clark song. To Wendy With Love was actually recorded by Sounds Orchestral originally on the Cast Your Fate To the Wind album and single (and was composed by John Schroeder with Johnny Pearson), so it originally had that Vince Guaraldi/Peanuts styled piano with a classical bent, but was updated here with a more groovy late 60s sound and with organ in place of the piano.

The covers include Epistle To Dippy (John Cameron's Donovan connection shines through here), The Turtles' She'd Rather Be With Me, Stevie Wonder's I Was Made To Love Her, and The Grass Roots' Things I Should Have Said. Out of these, I Was Made To Love Her is the best with its floor filling hammond organ grooves and Motown styled bassline, although the song takes awhile to cut loose.

Not as successful covers are the hippy dippy (and admittedly tough song to cover) San Francisco (Flowers In Your Hair), The Beatles' Lucy In The Sky With Diamonds, and 5th Dimension's Up, Up and Away. Lucy In The Sky With Diamonds is the most interesting of these with its unique string arrangement and dreamy harpsichord and flute that starts the song out, but the song doesn't amount to much after the rhythms kick in. Up, Up and Away is also pretty pathetic, but not many people could cover this song with the same quality as the original.