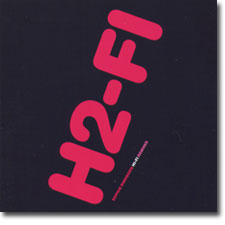 Sophie Rimheden gets the remix treatment on H2-Fi - Hi-Fi Remixes, the companion to her Hi-Fi album which came out in 2003. Hi-Fi was a mindbending affair filled with glitchy melodies and warped vocoder vocals by Sophie, and it's interesting to hear those songs get the remix treatment by the likes of Hakan Lidbo, Mikael Stavöstrand, Son of Clay, Hundarna Frän Söder, Static, Fenin, Pavan, Folie, Puss, Johan Skugge, Dwayne Sodahberk, and Sam Miller (some of whom are Swedish like Sophie).

The Pavan mix of Panik starts out the compilation by taking Sophie's voice from the mists and putting them upfront but in a glitched way. The beat is much simpler and easier to digest and the tune is more parred down for a nice meeting between Pavan and Sophie.

Lovin´ (Hakan Lidbo's Libido remix) has the elements we know and love from Hakan Lidbo's work - a clockwork like precision. He also chooses to remove most of Sophie's vocals and treat this mix like a dub mix. This mix will appeal to those who get annoyed by Sophie's vocodered vocals.

The Static remix is a groovy electro workout with soloing synths and Sophie working a groove in her vocal. A little repetitive in her vocals, but the track definitely has a good groove.

The Folie Hasselhim mix of Flow (the same song remixed as Flower above), gets a more ethereal treatment and smooths up the rough Sophie edges.

Sophie Rimheden remixes herself on In Your Mind and it's the closest we get to the originals. This is also one of the best songs from the album, so with just a little rap added in the middle making the difference this is a good mix but might be too close to the original.

I'm not sure which song the Differnet remix is, but it's one of the cooler remixes here creating a totally different Laub like environment for Sophie's voice.

Snack Revier (the Son of Clay remix) takes the ethereal approach even farther since it removes Sophie's voice completely (if indeed the original had vocals - from the retitled track it's hard to tell) to create an ambient, miminal piece which sounds like bells ringing and organs purring.

Johan Skugge gives Strange a miminal tech feel while at the same time transforming Sophie's voice into a quick burst of sound. It almost doesn't sound like a voice anymore.

Hundarna Frän Söder takes In Your Mind and tech dubs it for a laidback version. It was one of my least favorite versions besides the Fenin Sunnyside Up and Sam Miller remixes which also didn't do much for me.