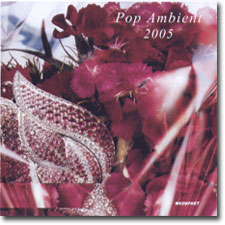 A yearly released series on the Kompakt label, Pop Ambient 2005 is in fact the 5th in the series (which started in 2001). This the more mellow, ethereal side of the Kompakt label, somewhere between the drifting nuances of The Orb (who appear here) and where it all began from the start with the ambiance setting tones of Eno or Tangerine Dream. More ambient than pop to be sure, there's tracks from The Orb, Markus Guentner, Gas, Triola, Pass Into Silence, Popnoname, DJ Koze, Andrew Thomas, Klimek, Peter Grummich, Ulf Lohmann and Thomas Fehlmann.

Always ones to be billowed on a cloud, The Orb begin the compilation with their cloudy, breezy track called Falkenbruck which is taken from their second Kompakt 12 inch titled Komplott from 2004.

Markus Guentner centers his attention on the clicking loop sound on his track Innenfeld. Gas (aka Wolfgang Voigt) continues the loop trend with an even quieter Eno-esque track fittingly entitled Pop.

Mondlied by Triola (aka Jörg Burger) is the first track with something other than synthesizers, with some ever evolving percussive instruments building rhythms, though it's also the first track to sound somewhat dated as well.

Pass Into Silence's (Tetsuo Sakae & Mayuchi) Blue hint at the duo's Japanese origin on this track that reminds me of Harold Budd.

Popnoname's Gold is a set of tones that hover until a haunting melody becomes apparent in the mist.

DJ Koze (aka Stefan Kozalla) is a member of International Pony (who have appeared on the Disco Pogo For Punks In Pumps Vol. 4 on Jockey Slut (rip) and This Is Bungalow - A DJ Mix By Le Hammond Inferno (CD) on Bungalow). I was a little nervous to hear an ambient track by a DJ, but his track Hummell has a combination synth drone and looping guitars for a fine effect.

New Zealander Andrew Thomas has co-produced a track on the Signer disc called The New Face Of Smiling, as well as an entire album on Kompakt from 2003 entitled Fearsome Jewel (as part of the Pop Ambient series). Soft Bullet is probably easier to digest than the Fearsome Jewel album which was an entire album created by dissecting one minute of music.

Klimek (aka Sebastian Meissner) goes out of his way to give a nod to the band Felt by naming his track Let The Snakes Crinkle Their Heads To Death (after the short instrumental album of the same name released in 1986). The guitar strums do remind me of Maurice Deebank's solo work, I only wish there was more of it here. They only really kick in, in the last minute.

Along with helping to run the Berlin based Boot Records, Peter Grummich has a slew of 12 inch singles out on Kompakt and Sender Records. Sunbeams is fittingly taken from the a-side of his Frozen World 12 inch on Kompakt released in 2004 and is a nice 8 minute bubbling synth work with hints of Japanese melodies.

Thomas Fehlmann's Visions Of Blah cd was a favorite of mine, and here we get to hear his track With Oil which is a really sweet b-side from his Little Big Horn 12 inch on Kompakt from 2004. It could be the theme to a lost Russian space movie.

Ulf Lohmann's Wasted Years is the only track that really drove me crazy with it's broken loops and dense keyboards not gelling for me with the end result sounding like a broken Christmas carousel.