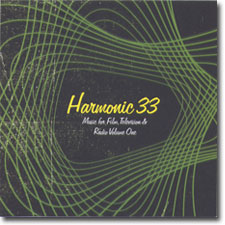 Harmonic 33 is Mark Pritchard (aka Trouble Man) & Dave Brinkworth (both of whom have also worked under the name Use Of Weapons) and Music for Film, Television and Radio Vol 1 is the first in a series of albums dedicated to the art of library music. Much like the French group Air, Harmonic 33 has created a soundtrack type of music, this time around with a fictitious soundtrack for film, tv and radio.

What makes this an interesting listen is the fact that Harmonic 33 has used real instruments instead of sampling other artists. I'm not sure they've made a work that in the end stacks up against the original library music labels like KPM, De Wolfe or Chappell, but they're definitely on their way to creating an interesting series of albums.

The titles of tracks gives you an idea of the sounds herein. Optigan has similar sounds to Tom Waits or Black Sabbath with the sounds of optigans and bells.

The theme to Carousel is a haunting carousel like melody that wouldn't be out of place in a horror film based around a merry-go-round.

Departure Lounge combines surf guitar with space synth sounds, while Shadow uses keyboard melodies and hovering organ sounds like the best of the Italian horror films. I do have to say the best was saved for last, where Harmonic 33 finally kick it up a notch on Planet 5 with 70s styled keyboards and a haunting melody which works its magic for 6 minutes.

At just under 40 minutes Music for Film, Television and Radio Vol 1 is a tad short, and while it seems Harmonic 33 could work this kind of music up to be more than the end result found here, anyone who likes library music or the modern groups like Air could enjoy this disc.