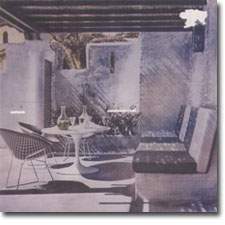 Its funny writing this review in Boston on a typically rainy day. I imagine the weather was like this when Antena's mini-album Camino del sol was recorded -- with the heavens opening up on Brussels. Antena was Isabelle Powaga, Sylvain Fasy and Pascale Moiroud, three friends from the South of France who finally found a home for their music on the independent Belgian label Les Disques du Crepuscule. Amidst the very old European buildings and typical grey weather, they dreamt of sunshine.

I know its a bit cliche to say this but, listening to the album again, it strikes me as how timeless it is, the musical references are obvious but skewed in just the right way, to make it sound innovative. This disc transports you to a warmer climate through its Brazilian roots. Its as if they wanted to craft their own versions of Tom Jobim songs (they go so far as to create their own cover with The Boy from Ipanema).

Neil Tennant, later of Pet Shop Boys fame, coined the term electro-samba while reviewing Antena for Smash Hits in 1982. Electro-samba it is. I love the production on this record -- it is rather sparse which complements the drum machine and vocal effects well. The songs are sung in French and English, lending the album an international feel as a whole. Europeans in Hot Weather. Numero Group's CD collects the entire output of Antena, the mini-album and singles, and re-arranges the tracks on this disc. Its hard not to love this disc, Antena took such care in writing songs, this is perhaps why there are so few of them, each is like sunkissed tropical cocktail, sweet and precious. They toured extensively in Europe with Tuxedomoon, 23 Skidoo, The Pale Fountains and Cabaret Voltaire. After that they were gone, the band expanded and Isabelle took over the musical direction of the group. It was re-named 'Isabelle Antena'. But that's another story.

Its hard for me to pick favorites on a release such as this. So I'll start with the beginning, Noelle a Hawaii, was my introduction to Antena, its their 'Christmas' song, which came out on Les Disques du Crepuscule's Christmas compilation Ghosts of Christmas Past, I love its vocals, where each girl seems to complete the other's sentence-- it also contains the line 'noel au crepuscule' (Christmas at Twilight). Then Camino del Sol, which has to be the ultimate humid holiday song, its full of sea, sex, and sun. Camino del Sol was also included on (the German label) Crippled Dick Hot Wax's compilation of erotic pop songs Chansons des Perverts. It is an elegant, lush, vibrant track that conjures up memories of an escape to the perfect sunny destination.

Last, but not least, their cover of the Michel Legrand classic Les Demoiselles de Rochefort (the song they cover is originally titled Chanson des Jumelles). This track is from French director Jacques Demy's 1967 film Les Demoiselles de Rochefort and was originally sung by Catherine Deneuve and her sister, Françoise Dorléac. The original track is admittedly, a bit more jazzy and produced, while Antena's version is a bit more spare in its production but every bit as cheerful and fun.

I love, I love, I love Antena. This CD should turn on a whole new audience to their happy sounds. Let it transport you to that humid tropical, clothing optional resort you've always dreamed about.

The Numero Group label in the gullbuy: