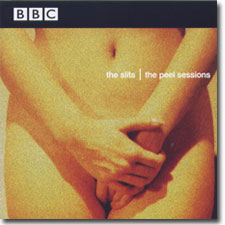 The Slits recorded only two albums in their brief existence from the late 1970s into the early 1980s. Like many of the premier punk groups from that time period, John Peel afforded them the time to record Sessions for radio broadcast on the BBC. While their albums have gone and gone out of print over the years, The Slits' Peel Sessions have been more widely available, and so often they were the only way people could hear the incredible punk energy in The Slits' raw and powerful music.

With this 10 song collection of Slits' Peel Sessions, all of the recorded sessions the group made have finally been made available. Included are 3 recording dates - the first two have been previously available tracks 1-4 (from Sept 1977) and tracks 5-7 from (April 1978). The last 3 tracks were recorded in October 1981 and were previously unreleased. Finally, the true picture of everything The Slits were capable of can be found on one amazingly raw and powerful disc which captures the group at their primitive live in the studio best.

There is in fact an unfettered rawness to the earliest recordings which in many ways put the recordings made for their first album to shame. Love und Romance, Vindictive, New Town, Shoplifting, So Tough, Instant Hit and FM are songs which were also recorded in studio versions for the Cut album in much more dub influenced versions. These live in the studio versions can all be heard in one go and in incredible clarity of vision with a razor saw punk energy. Everything sounds much clearer than the horrid sounding tapes on Cleopatra's In the Beginning (A Live Anthology).

A totally different band and sound is heard on the final three cuts - and this might just be the reason people will pick this collection up. The Slits mine the sound and stretching out to an awesome extended groove that the group developed on the under-rated second album called Return of the Giant Slits. Included are extended versions of Difficult Fun, plus an eleven minute version of In the Beginning and a eight and a half minute version of Earthbeat/Wedding Song, these three songs send the group into uncharted territory which is still refreshing new sounding to this day.

The Slits in the gullbuy:

Return of the Giant Slits