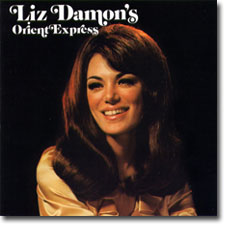 There could probably be a book dedicated to the lounge pop sounds that have come from or been inspired by Hawaii. From the likes of Don Ho who originated there, to Ginny Tiu who settled there, Hawaii has played a large part in the lounge pop sound of the past 40 years.

Often scoffed at for being cheesey, lounge pop is simply an array of emotions, feelings and sound color packed into a set of songs. Liz Damon's Orient Express play a big part in the now sound which was brewing in the early 70s when they enjoyed a hit with the song 1900 Yesterday. Rev Ola has compiled together a stirring set of music on cd for the very first time from Liz Damon's Orient Express.

Liz Damon's Orient Express was made up of four men and three women including Liz herself. This rather large group is able to expand upon the palate of sound they explore with both male and female harmonies which never sound out of place or without rhyme or reason.

Oddly enough there isn't anything overtly native Hawaiian here except for a relaxed groove throughout. Special mention should be made for the light and classy take on Bring Me Sunshine which reminds me of the Ginny Tiu meets the Sandler & Young sound. There's only one misstep in a version of Danny Boy, a song I could probably just do without.

Rev Ola has done a fine job including 10 songs from the original White Whale album and 5 bonus tracks to flesh out the original lp. A rather splendid job indeed!