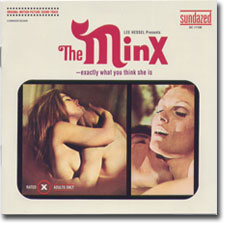 A surprising soundtrack for a band best known for pleasant 60s pop hits like Red Rubber Ball and Turn Down Day, the music The Cyrkle recorded for the X-rated movie The Minx actually has a lot to offer on this Sundazed reissue. A collectible album which was impossible to find for years for a forgotten movie from 1969, The Cyrkle give us a bit of everything on a soundtrack that really is worth tracking down.

The Cyrkle combine together a variety of sounds to create a soundtrack which fits the late 1960s perfectly. There's Monkees-like Boyce & Hart styled psych pop in Squeeze Play (and its alternate film version) and Murray the Why (which is that perfect bitter happy sound which sunshine pop bands could slip in so easily when they wanted to and which also has its alternate film version as well).

There's bouncy sunshine pop in the instrumental theme song for The Minx (which is also heard in a more subdued wordless vocal version that Siesta label lovers will just love) and Something Special (which has an alternate film version heard here as well).

There's a bossa acoustic folk pop sound inspired by Jobim in It's a Lovely Game Louise (which has some great Nick Drake-like piano fro around the same time he was on the scene) and Terry's Theme (which has Herb Albert instrumental written all over it).

And there's groovy break music - which has been indeed sampled - in tracks like The Rigging (60s groovy), Nicole (a raga rock tune heard in stereo and mono), On the Road (a moody groove), The Chase (groovy rhythms), and Kites (which actually has an excellent modal jazz groove). Who knew The Cyrkle could be so versatile? For those who like the depth that a sunshine pop band could truly go, The Minx is worth checking out.