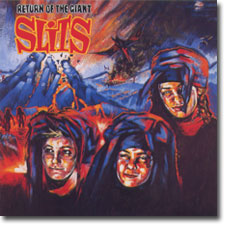 Best remembered for their early girl punk recordings circa 1977 and 1978 like the music found on their Peel Sessions, The Slits recorded two albums which had them moving towards the afro rhythms, reggae and dub sounds that so many other groups were mining in the post-punk period.

Groups like The Clash, Talking Heads, and The Raincoats all delved into a similar sound with various levels of success, but nothing really equals the mad mayhem that The Slits produced on their two albums, Cut (recorded in 1979) and Return of the Giant Slits (recorded in 1981). Both of these albums have never been as widely available as those by the other groups from this time period, probably because The Slits soon splintered, never looking back and never re-uniting. Both of these albums are crucial documents of the time however, and still sound fresh.

Island Records has reissued the first album recently (in 2000), but Return of the Giant Slits has never been issued on cd in the US. It looks like there are two versions that have been released outside the US, one with 12 tracks (including some bonus single b sides, dub mixes and interview clips) and this 9 track Japanese version (including the album plus a version of Earthbeat in Japanese). This material is sorely needing a US reissue in the same manner that Kleenex/Liliput received a Kill Rock Stars reissue.

Return of the Giant Slits is garnered a slicker sound than its predecessor thanks to the production of Dennis Bovell (who also produced the Slits' Cut album, as well as The Pop Group's Y - both in 1979) and Dick O'Dell (who produced The Raincoats Odyshape album in 1981 and released Sun Ra's Nuclear War 12" on his Y Records label in 1982), and the added musicianship of improv multi-instrumentalist Steve Beresford and drummer Bruce Willie Smith (Bruce later joined fellow Slits members Viv Albertine and Ari Up in the New Age Steppers).

Even with the slickness and musicians helping the sound of The Slits, the material is in fact an extension of their previous album but it actually takes them into very non-commercial direction. The music on Return of the Giant Slits matches the artwork which was used on the Cut album. Their label CBS was not pleased with The Slits defiance to being more commercially sounding, the album was not pushed by the label and the band soon broke up.

It's a real shame, because what The Slits came up with on Return of the Giant Slits is nothing short of breath taking. The songs might not have the punch of their early punk sides or the catchiness of the current pop trends circa 1981, but what they do have is a cutting edge sound and production. The songs have a meandering feel to them, but they remain centered by the incredible vocalizing of the Ari Up and her fellow Slits, the varied rhythms, and offbeat instrumentation.

Songs like Or What It Is?, Face Place, and Walk About take time to develop, but they each have their funk worked out. They can even get quite playful and oblique like on the groups’ chanting vocals, and horn & melodica melodies on Face Place.

Difficult Fun starts out with some slick synth lines but soon works in The Slits magic vocals and the groups dub style to perfection, even with added flute solos. Earthbeat is heard in two different versions, and even though it probably will be the English language version that is easier to relate to, the Japanese version which starts out the cd is the longer version. The versions are in fact quite different from each other, with the Japanese version being more oblique - in fact the song sounds almost wordless with The Slits singing in an almost avante garde chanting fashion, you might not even notice they are singing in Japanese.

For me though the ultimate highlight is the single from the record - Animal Space/Spacier, where The Slits dig into their animal side with mad guitar noises, toy piano and percussive bursts with transcendent results.

The Slits in the gullbuy: