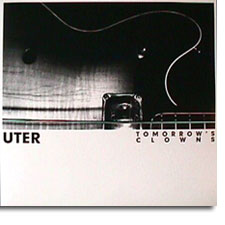 It's hard to tell if this 4 song EP is the start of something great (like the Ecstasy & Wine era My Bloody Valentine) or if Uter is just another artist who wears their influence too high up on their sleeve.

Uter is Declan Roney, and the 4 song EP is a fascinating if flawed attempt at combining the best of the electronic bedroom set with the shoegazing goodness of the Jesus and Mary Chain and My Bloody Valentine. Consisting of two instrumentals on side A and two covers on side B, we're left with the taste of what's to come.

Declan Roney works alone on this release for the most part (a little help from his brother on drums on the title track), and while I think a more collaborative effort on the music itself might have made this an incredible EP, the end result seems like the demo for something that could be really great. It's like those nights you wait for the clubfloor to fill up.

The fuzz of the Chain's guitar is back - coupled with the drum machines of Kraftwerk and the simplicity of The Cure and The Velvet Underground. Fitting then that Uter's two covers are the Jesus and Mary Chain's My Little Underground (the only tune with any real vocals to speak of) and Kraftwerk's Ohm Sweet Ohm (mostly instrumental, but with a little bit of the vocodered voice we know and love from the likes of Kraftwerk). Both covers are true to the originals, but add that element of DIY bedroom electronics.

The originals on side A show more of Uter's influence: a New Zealand/Cakekitchen - Closer era Joy Division melodic bass sense permeates Tomorrow's Clowns, which is augmented by the fuzzed out shoegazing guitars. Some female vocals, or buried male vocals like on My Little Underground would have really put this song into focus. The rush to the finish is reminiscent of The Cure at their best.

Vibrato on the other hand works as an instrumental (though I don't think that makes it the better of the two originals), with a VU What Goes On lick on the John Cale styled organ.