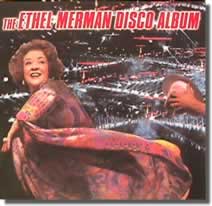 It was not uncommon during the heyday of disco to discofy just about anything - and everything was disco-fied. From Disco Duck to Meco's Star Wars and even to classical music - it was all put to a disco beat and what's more was quite popular. So, it comes as no surprise then.... the Ethel Merman Disco Album.... the brassy vocalist who first made her claim to fame working with Gershwin on the classic I Got Rhythm.

Ethel pulls a reverse Mrs Miller on this album: rather than singing the hits of the day as Mrs Miller did (and to come out of nowhere into super stardom), Ethel takes her old hits from her own super stardom day, perennial classics and puts the saucy disco diva touch to them. Sprinkled with magic disco dust thanks to Peter Matz - who incidentally had been nominated for two Tony Awards - and hey, look at this - Bud Shank and Ernie Watts played horns - so this what the great jazz musicians were up to when disco hit and there were bills to pay.

This here is the first time this lost disco platter has been released on cd, and it's in our hands thanks to Varese Sarabande who also were able to dig out an unreleased track too, to add to the 7 original cuts. There usually are one or two great cuts on Disco records  and those great cuts were often released also on extended 12 inch singles). And that is pretty much the case here - Everything's Coming Up Roses and Something for the Boys are the best songs here - though I Got Rhythm has a nice slow introduction by Ethel - and a riding groove for a few minutes with just the background vocalists - only to go over the top when Ethel comes in with the banjo and wah wah guitar while she sails: vocalizing effortlessly to the conclusion of the proper album.

The bonus cd track They Say It's Wonderful isn't half bad either though (making 4 out of the 8 tracks worth the effort) with some low lying horn charts which actually seem to point out some ambition in the arrangement. There is also some subtle background vocals during the horn solo interplay and some astounding Ethel-vocals during the fade. It sounds like a few more takes and it would have been releasable. One can only imagine about the remaining 6 tracks left wallowing in the vaults - according to the liner notes Ethel recorded fourteen songs in total.

By the end of this cd you may just find yourself dancing with Ethel.